JC Tran took down the WPT Rolling Thunder Main Event in his hometown of Sacramento after starting the day as one of three players with less than 25 Big Blinds. 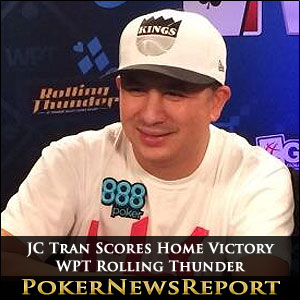 JC Tran took down the WPT Rolling Thunder Main Event in his hometown of Sacramento after starting the day as one of three players with less than 25 Big Blinds.

The conclusion of the WPT Rolling Thunder was an event to inspire anybody who finds themselves short-stacked at a final table. JC Tran started the final table as one of three players in the unenviable position of having less than 25 Big Blinds to play with, and faced with a mountain to climb against the two chip leaders – Quoc Pham and Preston Harwell – who had 72% of the chips in play between them.

However, after almost seven hours of intense final table action, it was Tran who lifted the WPT Champions trophy, collected his winner´s cheque for $302,750, and gave an interview in which he attributed his success in the event to “Kings” – not only a reference to the local Sacramento basketball team, but also to the cards which helped him most in his challenge to win the WPT Rolling Thunder Main Event.

When the six players took their seats at the Thunder Valley Casino, there was around thirty minutes to play in Level 25 (blinds 15,000/30,000 – ante 5,000). An intriguing battle between Quoc Pham and Preston Harwell looked imminent, especially as Harwell – who had been responsible for a series of eliminations of Day 3 of the WPT Rolling Thunder Main Event – had position on the chip leader.

No Lack of Early Action at the Final Table

With three short-stacked players at the six-handed final table, there was no lack of early action. Mimi Luu doubled-up in the second orbit of the button when her K♦ K♠ held against Quoc Pham´s flopped pair of Sixes, and then – in the eighteenth hand of the final table – Ken Jorgensen moved all in with A♣ 3♠ and got a call from JC Tran (K♥ Q♠). Jorgensen was ahead when the cards went on their backs, but the K♠ in the window gave Tran the hand and sent Jorgensen to the rail in sixth place.

A double-up by Tran against Benjamin Zamani A♦ A♥ > A♠ 10♣ improved Tran´s chip stack to more than 2 million chips, and Zamani was eventually eliminated in fifth place in a three-way pot against Quoc Pham and JC Tran, in which Tran (A♠ 4♠) hit a runner-runner Full House on the board of 8♠ 8♥ 4♥ / 4♣ / A♦ to best Pham´s J♣ J♠ and Zamani´s mucked hand.

Four-handed play continued for 63 hands, during which time Preston Harwell took control of more than half the chips in play courtesy of a massive pot against Quoc Pham of almost 6 million chips, in which Harwell´s J♥ J♠ held against Pham´s A♥ K♥. However, JC Tran – who had already eliminated two players – then eliminated two players more to reduce Harwell´s lead going into the heads-up.

Mimi Luu became JC Tran´s third victim at the final table, when she moved all-in with 8♦ 7♥ for the bottom end of a Queen-high straight, but Tran held K♦ J♣ for the top end of a King-high straight; and then Quoc Pham moved all-in pre-flop with 7♦ 6♦ and failed to connect with the board against Tran´s Q♥ 10♠ to be eliminated in third place.

Despite knocking out four players from the final table, JC Tran was still behind in the chip counts 8.415 million -v- 5.535 million when he and Preston Harwell sat down to contest the climax of the WPT Rolling Thunder Main Event. Tran closed the gap between the two players to little more than a million chips when his Q♦ 2♥ turned two pairs, and moved into the chip lead by taking seven hands in a row uncontested.

Harwell fought back, and regained the chip lead when his K♠ 5♠ caught two pairs before setting up his own sequence of uncontested pots; however JC Tran won a 5.11 million chip pot when his 8♠ 7♠ flopped two pairs and improved to a Spade flush to establish a 10.390 million -v- 3.560 million chip advantage. Tran started to apply the pressure and, despite doubling up A♣ A♠ > 5♠ 5♥, Harwell was reduced to less than 10 big blinds when Tran again connected for the board for two pairs (K♠ Q♥). A few hands later and it was all over: