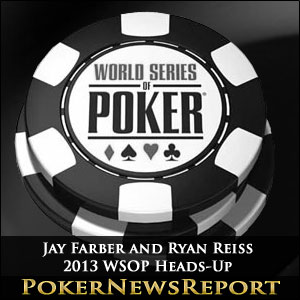 The conclusion to the 2013 World Series of Poker Main Event resumed yesterday afternoon (5.00pm local time) at the Penn and Teller Theatre at Rio All Suite Hotel and Casino in Las Vegas, with JC Tran holding a significant chip advantage over his eight final table rivals.

Tran had been prominent throughout the final day of the event in July (Day 7), and took the chip lead as the game went twelve-handed when his pocket Fours held up against Jay Farber´s missed flush draw. He extended his advantage by busting out Matthew Reed in eleventh (Q♦ Q♣ > K♣ 4♦) and Carlos Mortensen in tenth position (8♣ 7♠ > A♣ 9♥), but has had to wait almost four months to see if he could add a Main Event bracelet to the two WSOP bracelets he already owns.

By contrast, the only amateur in the field Jay Farber had only one final table appearance in his Hendon Mob database – this one – and Ryan Reiss´ seat at the final table was more due to luck than judgement after he had been one of the shortest stacked players throughout Day 7.

The WSOP Main Event Final Table was completed by Sylvain Loosli, Michiel Brummelhuis and Mark Newhouse – all of whom had held the chip lead during the previous two days of action – and David Benefield; who had been by far the most active of the November Nine during the WSOP hiatus and enjoyed profitable trips to the EPT Barcelona and EPT London.

Once current WSOP Champion Greg Merson had given the order to “Shuffle Up and Deal”, the game resumed in Level 35 (blinds 200K/400K – ante 50K) and the early action was dominated by two short-stack players doubling up against the odds.

In hand #5, Mark Newhouse shoved from the Big Blind with Q♣ Q♠ and received a call from Marc-Etienne McLaughlin (K♠ K♣) who would have taken the chip lead had his Kings held. As it was, the Q♥ was the first card out on the flop, and Newhouse doubled-up; although his success was only temporary – as he gave most of the chips back to McLaughlin three hands later when the Canadian rivered a set of Fives.

David Benefield had already shoved his chip stack into the middle of the table in only the third hand of the game (he got no callers) and then in hand #12 he tried again with K♠ 9♠ and received a call from Sylvain Loosli (K♦ J♥). Loosli paired his Jack on the flop of J♠ 7♠ 3♥, but the 2♠ spiked on the Turn to give Benefield the early double-up he needed.

With blinds increasing up to 250K/500K (ante – 50K), it only took a post-flop min-raise to win most of the hands, and Amir Lehavot did that to great advantage and take a brief chip lead from JC Tran. Lehavot and Tran exchanged min-raises and the chip lead for several hands, until Lehavot took a massive hit in a hand against Marc-Etienne McLaughlin.

Following the board of K♦ 6♦ 4♣ / J♠ / K♥ – and into a pot with almost 10 million chips already in it – Marc-Etienne McLaughlin fired out a bet of 7.2 million. Lehavot made the call and turned over A♠ K♣ for trip Kings. However, McLaughlin had K♠ J♥ for a rivered full house and was immediately catapulted into second place in the chip counts behind Tran.

Tran forged ahead, and was the first player passed the 40 million chips with one of his now customary min-raises from late position; however he was soon to face a new challenger for the chip lead after Ryan Reiss (A♥ Q♣) turned a Club Flush to take almost 5 million chips from McLaughlin.

Newhouse and Benefield First to Bust

The departures of Mark Newhouse and David Benefield happened within just a few hands of each other. Newhouse shoved the last of his chips into the middle with 9♣ 9♠ and was called by Ryan Reiss (A♠ K♥). The K♦ on the flop sealed Newhouse´s fate, and he was bust from the WSOP Main Event in ninth for $733,224.

David Benefield got all-in two hands later with K♠ 2♠ after a pre-flop raise from Jay Farber (A♣ K♦). Farber tanked for a long while before making the call, but it was a good decision to make as the board ran 5♦ 10♠ Q♣ / J♠ to give Farber a Broadway straight. There was no Spade on the River to complete Benefield´s flush draw and he left the tournament in eighth place for $944,650.

The eliminations of Newhouse and Benefield brought Reiss and Farber much closer to Tran in the chip counts. Farber took a narrow chip lead in the WSOP Main Event with a min-raise, but it was then Ryan Reiss who shot in the chip lead after Amir Lehavot and Marc-Etienne McLaughlin had both made pre-flop raises, which Reiss responded to by four-betting to 11.1 million chips and forcing the two other players to fold.

Brummelhuis Up and Out – Reiss Up and Up

Michiel Brummelhuis was the next player to leave the WSOP Final Table, but not before he had doubled up against Ryan Reiss 9♦ 9♥ > A♦ Q♦. Two hands later, Brummelhuis was dealt pocket Nines once again and four-bet 16 million chips into Ryan Reiss´ pocket Aces. The Aces held and Brummelhuis was eliminated in seventh for $1,255,356.

With his enhanced chip stack, Ryan Reiss took control of the table. He was the first player through the 50 million chip barrier, and the 60 million chip barrier after his 10♦ 10♠ flopped a set against JC Tran and, at the end of Level 37 (blinds 300K/600K – ante 75K), he had built a substantial lead over his five remaining opponents:

Reiss and Farber Dominate as Panda-Monium Breaks Out

As the game moved into its next level (blinds 400K/800K – ante 100K), the game became cagier. JC Tran´s slide down the leaderboard continued as he came under increasing pressure from Amir Lehavot and Jay Farber (who was seated immediately to Tran´s left following the departure of David Benefield), and it was Farber who closed in on chip leader Ryan Reiss when rivering an Ace to take a 10 million chip pot from Lehavot A♦ Q♦ > K♦ J♣.

Reiss and Farber – now both sitting behind chip stacks in excess of 60 million – continued to dominate, with most of the pots being won by pre-flop min-raises or small blind shoves. The pace of the action slowed considerably, prompting one of Jay Farber´s supporters dressed as a panda mascot to invade the stage and be escorted from the venue by security staff. According to WSOP.com editor Jess Welman, a replacement mascot was quickly arranged.

The biggest winner in Level 38 looked like being Marc-Etienne McLaughlin, who doubled up A♥ K♥ > A♦ 7♠ against JC Tran to reduce Tran to his last 10 million chips and then used his stack wisely to chip up above 30 million chips with a series of pre-flop and post-flop raises. However, just before the close of the Level, McLaughlin and Farber got involved in a pre-flop raising war which saw McLaughlin moving all-in for 38.6 million chips. Farber quickly called and the cards were on their backs:

McLaughlin´s elimination saw an explosion in action at the final table. JC Tran moved all-in for his last 9.925 million chips and Farber made the call from the Small Blind. Tran (A♥ 7♠) was ahead against Farber (K♠ Q♥) as the cards were laid in their backs, but the flop of K♦ J♥ 9♥ changed the complexion of the hand completely. The Turn (5♦) and River (6♥) failed to produce the Ace that Tran needed to stay in the tournament and the chip leader at the start of the day was sent to the rail in fifth for $2,106,893.

Just three hands later and there was another all-in and call. This time Amir Lehavot was risking his tournament life with J♠ J♦ against Ryan Reiss´ A♣ 6♠. Lehavot´s Jacks held to double him up, but there was no release from the action as six hands later Sylvain Loosli was also placing his tournament life at risk with Q♥ 7♣ against the A♣ 10♥ of Ryan Reiss. The flop and Turn of 9♥ K♠ 8♥ / 9♣ failed to improve Loosli´s hand, and the A♦ on the River sealed the Frenchman´s fate – Loosli bust in fourth for $2,792,533.

Incredibly, the very next hand saw the final elimination of the night, as Amir Lehavot moved all-in from the Big Blind with 7♠ 7♦ against a pre-flop raise from Ryan Reiss (10♣ 10♦). Reiss had no hesitation in calling Lehavot´s shove and the cards, once again, were on their backs. The board of Q♣ 8♣ 4♥ kept Reiss firmly ahead in the hand, and the 2♦ and J♦ on the Turn and River confirmed Lehavot´s elimination in third place for $3,727,823 and set the heads-up between Jay Farber and Ryan Reiss.

Looking Ahead to the Conclusion of the Main Event

When play resumes tomorrow at the Penn and Teller Theatre, the two remaining players will be five hands into Level 39 (blinds 500K/1,000K – ante 150K). Jay Farber still has a significant chip advantage over his opponent, but Ryan Reiss has enjoyed a considerable amount of good fortune in this event, and it would not be inconceivable that he overturns the chip deficit the cards are in the air for the climax of the World Series of Poker Main Event this afternoon.