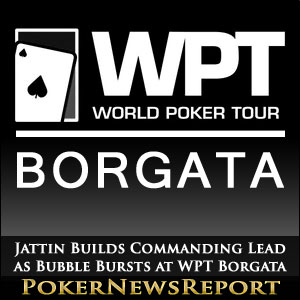 Day 3 of the WPT Borgata Winter Poker Open Championship was a long and brutal one, as the field of 188 players was reduced to just 36 after fourteen gruelling hours of poker. It was a day on which many of the Borgata´s most recognisable players bust from the event – some out of the money, others in the money but showing a net loss after entering multiple times – with a handful still remaining in pursuit of the $842,379 first prize.

The stand-out name at the close of play was that of Farid Jattin – a much travelled professional poker player from Florida, who finished second in the 2011 Summer Poker Open Championship Event and who recently recorded the biggest cash of his career to date ($147,760) when winning the Isle Poker Classic at Pompano Beach earlier this month.

Jattin Waits for the Bubble to Burst before Making a Splash

Farid Jattin entered Day 3 of the WPT Borgata Championship with a chip stack of 349,000 chips – sufficient to see him within the top twenty-five players at the start of play and enable him to coast through the 120-player bubble. However, once the bubble had burst, Jattin went on a heater.

Having bust Nicholas Reynolds A♠ K♣ > 9♣ 9♦ to chip up beyond one million chips, he took the chip lead when his pair of Aces held in a massive pot against chip leader at the time Kunal Patel, and then finished the evening by eliminating James Calderero in 41st place A♣ 10♣ > A♥ 2♥ after all the chip had gone in on an Ace-high flop.

Jattin takes a massive stack of 3,818,000 into the penultimate day of the WPT Borgata Winter Poker Open Championship – 74 big blinds ahead of his closest opponent Jared Jaffee (2,340,000 chips) with Robert Merulla (2,150,000 chips) a further ten big blinds back in third.

Inasmuch as Farid Jattin´s rise to the top of the leaderboard was pretty impressive, most of the day´s action revolved around Day 1A and Day 2 chip leader Lazaro Hernandez. Hernandez was the first player to top one million chips when busting out an opponent in the first level of play J♥ 10♥ > 9♠ 9♣ (Hernandez flopped a Full House), and he was also responsible for eliminating Dale Jamison A♣ J♣ > A♠ 2♠ to burst the money bubble.

The Hernandez steamroller continued after the bubble burst and, although he doubled up a couple of short-stacks, maintained his chip advantage when busting out Paul Spitzberg A♦ K♥ > 2♠ 2♣ in sixty-second place. However, when a steam-roller is stopped in its tracks, it is normally abrupt and sudden, and that is exactly what happened to Lazaro Hernandez.

Michael Arrington was the first beneficiary of Hernandez´ desire to be involved in any pot when doubling up Q♥ J♠ > K♣ J♣ on a Queen-high flop; but Byron Kaverman was Hernandez´ main tormentor – reducing the big man´s stack to below average when his paired K♦ J♠ held against Hernandez´ (5♣ 7♣) missed flush draw, chopping him down to less than 10 big blinds (K♦ Q♦ > 4♦ 4♠) when catching the Q♥ on the Turn, and finally busting the former chip leader in forty-second place A♠ Q♥ > A♣ 2♦.

Two Ladies with One Eye on Making History

No female poker player has ever won an open WPT Main Event in twelve seasons of the “Tour”, but two ladies did their chances of creating history yesterday no harm – Ronit Chamani and Katayon Khaterzai – who survived Day 3 of the WPT Borgata Poker Open Championship with 807,000 chips and 626,000 respectively.

Chamani´s climb up the leaderboard was unchronicled, but Khaterzai´s chip stack came primarily at the expense of Wade Woelful – who doubled the New York local player up K♥ K♣ > A♠ J♠ before getting all-in in the penultimate level of the night with A♦ J♣, and failing to improve past Khaterzai´s dominant A♥ K♥.

Both women have tasted WPT success before – Ronit Chamani appeared on the final table of the WPT Emperors Palace in Johannesburg last November, while Katayon Khaterzai finished in sixteenth place in the WPT Borgata Summer Championship Event in September. We wish them both good luck on the run down to the final table.

When Ronit Chamani, Katayon Khaterzai and the other thirty-four survivors from Day 3 take their seats in the Borgata Poker Room this afternoon, they will have a few hands to play out in Level 24 (blinds 10,000/20,000 – ante 3,000). The next player to be eliminated is assured of $15,084, and those who make it through to Friday´s final table are guaranteed a payday of at least $174,352.