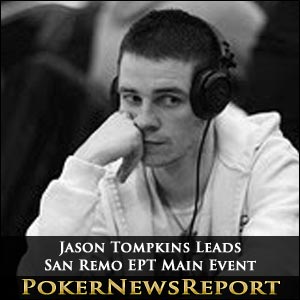 After Monday´s impatient dash through the bubble, Day 4 of the EPT Main Event at the Casino San Remo was anticipated to be over in the blink of an eye. However it took nearly six levels of play and almost ten hours until the starting field of sixty-seven was reduced to the twenty-four players who will compete on the final three tables when play resumes at 2.00pm this afternoon.

Jason Tompkins had started the day in sixth position, but wasted no time in improving his position with the early elimination of David Vamplew. In the first level of the day, and having four-bet the pre-flop pot up to 116,000, Tomkins (A♦ K♦) put sufficient pressure on Vamplew (Q♥ Q♠) for the Scot to shove his last remaining 463,000 chips into the middle. Four diamonds among the community cards gave Tompkins the Flush and the biggest pot of the tournament so far, and catapulted the Irishman over one million chips into the chip lead.

How to Win a Million …

Tompkins early chip lead was not to last long. Matt Salsburg – who would have been Day 3 overnight chip leader had he not lost a major two pair < two pair pot in one of the last hands on Monday – crippled Lorenzo Sabato early in Level 20 for a massive pot when his two pair was the better hand this time, and then finished the job against the Italian when his pocket Aces held against Sabato´s 10♥ 9♥ on a Nine-high board. Salsburg extended his lead and built his chip stack up to 1.7 million with the elimination of Ioannis Kontonatsios (K♦ K♠ > 8♣ 8♠) and when rivering a straight to cripple Justin Bonomo.

… and Lose a Million

However, the curse of the underpairs came back to haunt Salsburg. First he doubled up Iulian Ruxandescu when his pocket Sevens could not improved to beat Ruxandescu´s 9♠ 9♦, and an hour later doubled up Michael Benvenuti when tabling pocket Jacks against Benvenuti´s pocket Queens. Salsburg finished the day with 783,000 chips to fight another day, but will be hoping that the next time he builds a substantial chip lead he can hang onto it.

Matt Salsburg was not the only player to lose a stack of chips in a short space of time – Italian poker player Amerigo Santoro managed to lose 1.5 million in one hand! Santoro had just chipped up with Q♠ Q♥ against Giuseppe Ottaviani´s A♦ Q♦ when he thought he saw an opportunity in Level 22 (blinds 8K/16K ante 2K) to squeeze Jason Tompkins from the small blind. Tompkins called Santoro´s pre-flop three-bet of 74,000 chips and his continuation bet after the flop of 8x 5x 4x. A Three on the turn prompted a bet of 120,000 from the Italian, which Tompkins raised to 285,000 before Santoro responded to by announcing he was all in for 1.5 million chips. Jason Tompkins snap-called for his last 1.2 million chips and turned over pocket Eights for a set. Santoro wheeled over A2 for a straight, but a Three on the turn paired the board and gave Jason Tompkins a full house and a chip stack just short of 2.5 million chips.

Inge Forsmo – who had gone into Day 4 of the EPT San Remo Main Event as chip leader – still holds a handy position in second place behind Jason Tompkins. He maintained his uncharacteristic patience during the day to pick his spots carefully and doubled his chip stack throughout the day – most significantly with the elimination of Italian Mauro Mancin (A♠ K♣ > J♣ J♦). Tompkins and Forsmo were the only two players to finish Day 4 with more than 2 million chips in front of them, with a stack of players clustered around 1.7 million chips.

Who Are These People?

The leader board for the EPT San Remo Main Event contains many players who will be unfamiliar to the casual observer. Only Jason Tompkins, Ludovic Lacay and Iulian Ruxandescu among the top ten players have ever cashed in any EPT tournament before – Ruxandescu having the best result with a 20th place in the 2011 EPT Snowfest – and, looking further down the list of players who will be starting the penultimate day of the EPT San Remo Main Event, not one of the sponsor´s “Stars” remain in the field.