The amateur’s win is good for $186.6k and automatic entry into the 2014 National Championship. 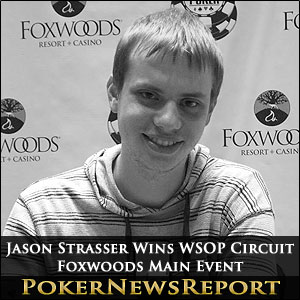 The amateur’s win is good for $186.6k and automatic entry into the 2014 National Championship.

It seems that every year, the competition at high buy-in events gets steeper and more formidable. Whereas a few years ago, amateurs stood a fair chance to win a tournament, today’s game is based on leveling contests, reads and styles. To a degree, the game has passed amateur players by, which is why it is so refreshing to see someone who doesn’t play poker for a living take down a major title.

That’s exactly what happened on Monday as 28-year old financial professional Jason Strasser won the Foxwoods WSOP Circuit Main Event. The New Yorker’s victory netted him nearly $187k and entitled him to a free entry in the 2014 National Championship.

Circuit events are a stomping ground for less recognized pros and enthusiastic amateurs. Typically passed over by the biggest names in the poker world, the Circuit’s lower buy-in events allow up-and-coming stars to test their mettle against other second tier opponents. Grinders like Loni Harwood and Max Steinberg have gone on to bigger and better things – both of them winning WSOP bracelets.

Day 3 of the Main Event began in rousing fashion as Bryan Leskowitz doubled through chip leader Wes Wyvill on the very first hand. Minutes later, the returning field of 11 was reduced to nine, setting the stage for what would become a memorable final table.

One bizarre hand saw Mike Guadano open from the button. Scott Baker would then follow with a three-bet, and big blind Wyvill would four-bet. The initial raiser got out of the way and Baker called. The flop came K♣J♠4♠. Baker open jammed for nearly the pot and Wyvill snapped with the nuts K♦K♠. Baker held top pair and was drawing practically dead. He would be eliminated in seventh.

Finally, after several levels of play, Wyvill and Strasser were heads up. Strasser began the battle with a nearly 1.5:1 chip lead, but several fortunate flops allowed Strasser to pull ahead to a 2:1 chip advantage.

Then this hand happened: Strasser opened to 175,000 and was called by Wyvill. The flop came Q♥5♣3♦ and Wyvill check-called Strasser’s continuation best of 175,000. The turn brought a 6♣ and Wyvill check-called a big bet of 700k. The 5♠ hit the river, pairing the board. Wyvill checked and Strasser jammed. After thinking it over for a while, Wyvill called. Wyvill’s flashed top pair, which was no good against Strasser’s rivered trips K♥5♥. Wyvill was rewarded $115k for his efforts.

In other news, Ryan Methia, who went into the tournament as the Foxwoods Circuit Casino Championship leader, would retain his number one ranking and secure an automatic bid into the National Championship.