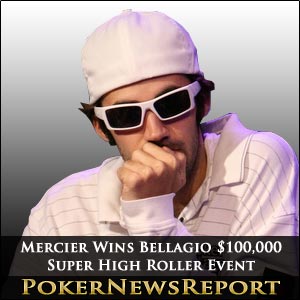 The World Poker Tour (WPT) Five Diamond World Poker Classic wasn’t the only show in town at The Bellagio in Las Vegas over the weekend as British pro James Dempsey took the top prize. The Bellagio $100,000 Super High Roller event also attracted its fair share of interest as Team PokerStars Pro Jason Mercier emerged victorious from a stellar 29-player field to lift a top prize of $683,767 richer, as well as a seat worth $25,000 for next May’s WPT World Championship – also at The Bellagio.

That victory also took the 25-year-old from Hollywood beyond the $8 million mark for live tournament earnings over his career after he, Issac Haxton and David Sands agreed to a deal once the thrilling event had become three-handed.

The two-time World Series of Poker (WSOP) bracelet winner eventually overcame Montana’s Sands in what was a tense session to secure the Super High Roller crown, with his heads-up opponent receiving $619,000 and internet phenomenon Haxton leaving with $582,000.

Vegas-based Haxton was first to go from the three-way clash, leaving Mercier and Sands to fight out a 60-minute head-to-head as the eventual winner built up a 3 to 1 chip advantage before overcoming his opponent.

However, with only five players cashing at the tournament, there was plenty of audacious and forceful play on show as every player attempted to build up an imposing chip stack as the eliminations arrived.

With only 10 players left remaining, the field was packed full of quality as the likes of Mercier, Sands, Haxton, Smith, Bonomo, Negreanu, Matt Waxman, Tom Marchese, Nick Schulman and California’s Roger Sippl – who eventually ended up in fifth spot for $192,960 – eyed up the big prize.

The unfortunate bubble boy was Bonomo as he busted out in sixth place, so leaving The Bellagio empty-handed.