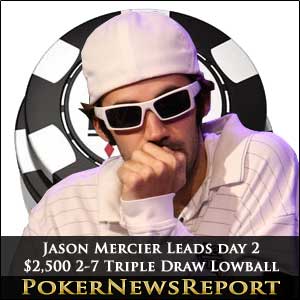 The event started out with 309 entries to create a prize pool of $702,975 and, following 189 eliminations on day one, another 117 crashed out last night in the Rio All-Suite Hotel & Casino’s Amazon Room.

If 24-year-old Mercier wins this current event, he will surely take the WSOP Player of the Year title and put himself right up there as possibly the world’s best player.

But he’ll have to overcome some other stars to collect his third WSOP bracelet – to add to his $1,500 Pot-Limit Omaha title from 2009 – as the likes of Elezra, who has three cashes from mixed-game poker tournaments at this year’s WSOP, and 2011 WPT World Championship winner Seiver remain well in contention.

As is the case in every event, some stars failed to make it out of day two, including Robert Williamson III, Gavin Smith, Pat Pezzin, Daniel Negreanu, Tom ‘durrrr’ Dwan, Greg Raymer, Joe Hachem and Mike Matusow.

But the big question remains: can Mercier collect a second bracelet this summer and tie up the Player of the Year award?