The Global Poker Index 300 has not been the most thrilling race the past few weeks as, once again, the top 10 remained unchanged after last week’s spark of excitement. 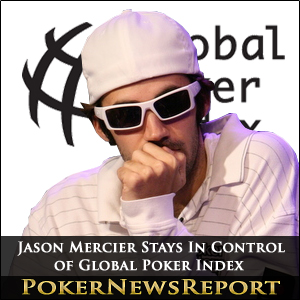 February always seems to suffer somewhat from a severe lack of excitement. December is thrilling as Christmas approaches, while January welcomes in every new year with hope and positivity. However, the second month usually provides a feeling of ennui – and, while poker is never boring, the world’s greatest game does possess some similarities to life.

Certainly, the Global Poker Index (GPI) 300 has not been the most thrilling race the past few weeks as, once again, the top 10 remained unchanged after last week’s spark of excitement when Team PokerStars Pro Jason Mercier took the top spot from fellow American Erik Seidel.

Having returned to the number one spot last week, the Hollywood-based 25-year-old could well be starting a long reign atop the GPI – even though he lost 10.78 points this week.

Of course, the main reason behind this temporary lull is the lack of big tournaments this month to add to players’ scores following the blast of excitement that came with the arrival of the PokerStars Caribbean Adventure (PCA) just days into 2012 and then the swift follow-up that is the always-thrilling Aussie Millions.

Daniel Negreanu Sure to be On the Rise

These were not the only attractive tournaments played during last month, of course, but February does experience a slight hangover following the thrills and spills of live play on Paradise Island and in Melbourne.

However, the good news is we are sure to see some interesting place changes on the GPI over the next few weeks as the likes of Team PokerStars Pro Daniel Negreanu (1,618.67 points) should move up a few notches from his current 77th place following the Canadian’s sixth place finish in the Latin American Poker Tour (LAPT) Grand Final R$4,000 main event.

That score – for R$48,730 – will definitely add valuable points to the four-time WSOP champion’s score for Period 1, so we could be talking about Negreanu’s return to the top 50 in seven days’ time.

The European Poker Tour (EPT) Copenhagen main event – which was won by Danish Team PokerStars Online member Mickey Petersen for DKK2,515,000 – will also provide movement on the GPI very soon, while the relative calm in tournament play will come crashing to a thrilling halt, as well.

However, New Yorker Seidel is likely to fall even further down the rankings through scores ageing, with the 52-year-old’s success this time last year at the LAPC’s $25,100 buy-in High Roller event being a prime example of points being lost.

With Seidel’s first place in the $25,000 No-Limit Hold’em event for $750,000 at the NBC National Heads-Up Championship in Las Vegas dropping down into Period 2 the following week, it is likely Ukrainian Eugene Katchalov – who is just 88.84 points back on 2,709.37 in fourth place – will move above the American.

Maybe even Canadian Shawn Buchanan can make a move to displace Seidel as he sits in fifth place on 2,672.49 points.

So, with no movement inside the top 10, we have to look a bit further down the GPI to get any significant changes, with David Benyamine, Mclean Karr, Andy Frankenberger and Christian Harder making big moves – although not all positive.

Before we get to that illustrious quartet, though, Philadelphia’s Matt Glantz (2,134.84 points) continued his steady rise in the rankings to take 20th place from Englishman John Eames (2,130.66), who actually dropped down two spots to 22nd as Californian Bryn Kenney (2131.32) also moved up one place into 21st.

Glantz was initially ranked at 108th when the GPI debuted back in June last year, but has slowly but surely made his way into the top 20, although this latest movement is due solely to Southport’s Eames losing 11.01 points as one of his results from 2010 ages into Period 5.

Benyamine, who had been as high as 23rd on the list back on June 18, lost 158 points with those scores moving.

One-time WSOP bracelet winner Frankenberger, of Massachusetts, didn’t fare much better as he fell 38 places to 190th on 1,267.30 points as his up-and-down journey on the GPI continued.

Having reached a peak of 77th back on November 21 last year, the WPT Season IX Player of the Year has, in general, experienced a downward path – and may even drop outside the leading 200 pros next week.

New York-based Frankenberger made a huge impact on the live poker circuit back in 2010, but his victory for $750,000 in the WPT Legends of Poker $5,000 buy-in No-Limit Hold’em main event in LA on August 25 that year has now fallen into Period 4.

That movement has prompted a negative knock-on effect as his 11th place finish for $13,072 at the WSOP Circuit Caesar’s Palace $5,000 No-Limit Hold’em main event in Atlantic City on March 14 is no longer counted, with Period 4 now full for Frankenberger.

London-based American Karr experienced the second biggest points fall this week as he lost 154 to drop down 12 places to 40th on 1,887.32 – mainly because his victory for $74,706 at August’s Parx Open Classic $1,850 No-Limit Hold’em main event in Pennsylvania aged into Period 2.

The 30-year-old from Indiana was hit even harder as his 33rd place in the EPT San Remo €2,000 No-Limit Hold’em event in Italy back in May last year is now excluded from his Period 2 scores.

Dan Smith Drops Down to 88th

However, Maryland’s Harder enjoyed a 14-place leap into 27th on 2,050.60 after picking up 173 points as the young star earned all those points from his 13th spot at the WPT Lucky Hearts Poker Open $3,500 buy-in No-Limit Hold’em Championship Event for $11,505 on St Valentine’s Day in Hollywood.

The 24-year-old previously had just three scores in Period 1, so has now claimed his highest placing since January 2, when he was ranked at 16th.

Barry Greenstein Climbs Up to 73rd

Three-time WSOP champ Barry Greenstein gained the second most points when adding 116 to move up 27 spots into 73rd on 1,641.66 after the 57-year-old from Chicago took second place in the LAPC $1,500 buy-in Chinese Poker Event on February 16.

But his 33rd spot from the WPT Regional $2,000 No-Limit Hold’em Championship at the Summer Splash in Hollywood last August helped his overall score as it aged into Period 2 to now give Venovski a full set of scores for the first two periods.

Additionally, four players returned to the GPI 300, with California’s Jason Wheeler leading the way by climbing into 250th on 1,141.64 points after he made big gains from his seventh place at the main event of the Venice Grand Prix.

The 35-year-old makes his return thanks to his sixth place in the German Championship of Poker (GCOP) Grand Final €2,500 No-Limit Hold’em main event two weeks ago for $28,099.

That, of course, means six players dropped off the top 300 – and they are Mike Leah, Mads Wissing, Grant Levy, Eric Haik, Andrew Teng and Amnon Filippi.