Jason Mercier Signs Up To Play The Big One

Jason Mercier is the latest poker star to sign up for the $1 million Big One for One Drop event #55 at this 43rd annual (WSOP in Las Vegas. 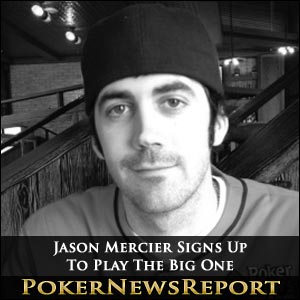 Jason Mercier is the latest poker star to sign up for the $1 million Big One for One Drop event #55 at this 43rd annual World Series of Poker (WSOP) in Las Vegas.

The Team PokerStars Pro signed on to his account with microblogging website Twitter to write that he had paid the $50,000 deposit and was now ready to sell some of his action in the No-Limit Hold’em charity event.

The two-time WSOP champion from Florida will join other big-names players such as Team PokerStars Pros Daniel Negreanu, Jonathan Duhamel and Bertrand ‘ElkY’ Grospellier, Party Poker Team Pro member Tony G, Tom ‘durrrr’ Dwan, Patrik Antonius and Erik Seidel, among many others, for what will be the richest poker event ever staged when it kicks off for three days of action on July 1 at the Rio All-Suite Hotel & Casino.

The 25-year-old star has performed well when entering smaller fields – having won the $100,000 buy-in Doyle Brunson Five Diamond World Poker Classic High Roller for $709,767 last December against 24 opponents – so should be right at home in the Big One as the upper limit for entries has been set at 48.

Additionally, Mercier also outlasted the 86-entry field to take down the £20,000 buy-in High Roller tournament at the 2008 European Poker Championships in London for $944,847 when beating John Juanda in their heads-up clash.