Jason Mercier Returns to the Top of the GPI 300

Jason Mercier has regained the top spot on the Global Poker Index (GPI) 300 for the first time in five weeks, replacing fellow American Erik Seidel in the number one slot. 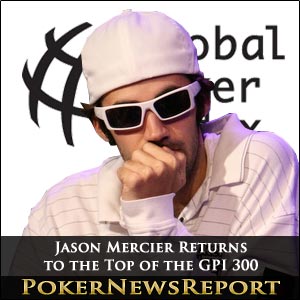 Jason Mercier has regained the top spot on the Global Poker Index (GPI) 300 for the first time in five weeks, replacing fellow American Erik Seidel in the number one slot.

With fewer tournaments counting towards scores this month, many players have seen GPI scores age into less weighted periods – and that is certainly what has happened to eight-time World Series of Poker (WSOP) bracelet winner Seidel, who is now at his lowest position since December 26 last year after suffering the biggest points drop of any player on the GPI 300.

The New Yorker has, in fact, fallen two places – for his biggest ever drop on the rankings – with French Triple Crown winner Bertrand ‘ElkY’ Grospellier also moving up one spot to second on the list.

Poker Hall of Famer Seidel, who enjoyed an incredible 2011, has held on to the top spot for longer than anyone else in the rankings, but has started this year off with fewer impressive results, so allowing the Hollywood-based Mercier to climb into the number one placing.

The 52-year-old’s slide into third place comes as a result of his runner-up spot in the first Epic Poker League (EPL) $20,000 buy-in No-Limit Hold’em Six-Max main event back in August of last year ageing into Period 2.

Seidel, who had the maximum four scores in Period 2 from the last rankings, sees his second place in the EPL replace his 13th from event #33 – a $10,000 buy-in Seven Card Stud Hi-Low Split-8 or Better Championship – at last summer’s WSOP, so resulting in 175 points being added to his Period 2 scores.

But that healthy gain has been nullified by the points loss he has suffered in Period 1 as he now has just three recent scores counting towards his points total – resulting in an overall loss of 280.63 points.

However, unlike Seidel, Team PokerStars Pro Mercier still has good scores in Period 1, while his EPL finish has boosted his Period 2 score to ultimately result in a points increase.

Another Team PokerStars Pro, Grospellier, meanwhile, has upped his score by 14.33 points to 2,853.56 to enjoy a 64.35-point lead over the subdued Seidel, while places four and five remain unchanged with Ukrainian Eugene Katchalov dropping 51.15 points to sit on 2,709.37 and Canadian Shawn Buchanan showing no change on 2,672.49.

However, English pro Sam Trickett (2,277.96) lost 158.86 points and five places as he fell out of the top 10 into 11th place to allow the five players below him from the last rankings list to all move up one spot.

The 25-year-old from Nottingham had enjoyed a healthy few months on the GPI, but – as with Seidel – lost some Period 1 points after his 11th place in the EPL main event from August aged into Period 2 and has no recent scores to replace it.

Another English star, Jake Cody, lost 141.02 points and 11 places to fall out of the top 30 into 31st place after enjoying a rise of four places the week before.

Rochdale’s Triple Crown winner had been as high as 11th as recently as December 5, but has – excluding last week’s rise – generally shown a downward trend to now sit at his lowest ranking since being 70th back on October 17.

Cody’s loss is, however, John Eames’ gain as his fellow Englishman has moved up one spot into 20th on 2141.67 points, while another beneficiary of that fall is American Matt Glantz.

Philadelphia’s Glantz has moved up six places on to 2134.84 to be among a small group of players to enjoy increases in points after his 14th place in the inaugural EPL main event at the Palms Casino in Las Vegas aged into Period 2.

However, as opposed to Trickett and Seidel, Glantz – who made his GPI debut at 108th last June – actually had too many Period 1 scores so the EPL result has been replaced to boost his overall points by 31.

The only other movers within the top 20 sees New Jersey’s Chris Klodnicki (2264.34) move up one place to 13th as he replaces Vegas-based Sam Stein (2261.29), who has dropped to 14th after losing eight points due to ageing.

However, results from some of the smaller events in Europe have helped boost players further down the rankings, with Idaho’s Kevin MacPhee zooming up 88 places to 102nd on 1,518.33 points after winning the European Poker Tour (EPT) Deauville €5,000 buy-in No-Limit Hold’em Six-Max High Roller back on February 6.

MacPhee’s 247-point gain means the eight-time WSOP in-the-money finisher is on the verge of returning to the top 100 for the first tome in 10 weeks after being ranked as high as 70th in mid-December.

Another Vegas-based pro, Shaun Deeb, has climbed 66 spot to 119th on 1,474.31 points after finishing as runner-up to MacPhee in France to add 194 points to his overall tally.

The WPT Venice Grand Prix €4,500 buy-in No-Limit Hold’em main event also helped some pros climb the rankings, with Italian Andrea Dato moving up 292 points and 130 places to 153rd on 1,384.12 points for the biggest gain on this latest rankings after finishing third in his home tournament.

Denmark’s Simon Ravnsbaek – who finished fourth at the Venice tournament – shot up 271 points and 97 places into 98th on 1,529.69 for the third biggest points gain of the week.

Trickett and Seidel were not the only players to suffer through the ageing of last August’s EPL result as champion David ‘Chino’ Rheem, of Los Angeles, suffered a 132-point loss as that win aged into Period 2 to leave him with just one score in Period 1.

But Khan had four results in Period 2, so his EPL cash saw him drop even more points as that result pushed out another score as no one can have more than four results qualifying in any single period.

Virginia’s Bonomo suffered the biggest drop, though, as his 18th place at the inaugural EPL fell into Period 2 to leave him with just one Period 1 score.

Meanwhile, just four players returned to the GPI 300, with the Czech Republic’s Vojtech Ruzicka taking the 169th spot on 1,1330.04 points following his victory for $161,146 in the €2,500 buy-in No-Limit Hold’em main event of the German Championship of Poker (GCOP) Grand Final on February 13.

Levy (seventh) and Meyers (ninth) also cashed at that first ever EPL main event, so – as with the majority of those in-the-money finishers – they have seen that score age into Period 2 to fall off the 300.

Incredibly, there is not one player making their debut on the rankings list this time around, mainly due to the lack of big events to add to any previous scores.

The next rankings list should show some more notable movement, however, as results from the WSOP Circuit Palm Beach, EPT Copenhagen and the Latin American Poker Tour (LAPT) Grand Final Carnival Poker Festival in São Paulo will be added to Period 1 scores.

Remember to check back here for the latest poker news and the latest developments on the GPI.