Jason Mercier on Cloud Nine After Taking Another GPI Record

Jason Mercier has set a new record for successive weeks at number one on the Global Poker Index (GPI) 300 rankings after remaining on top for a ninth week. 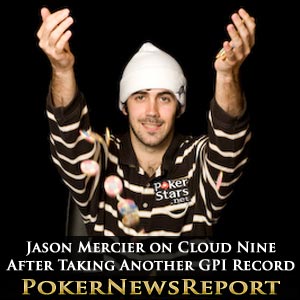 American poker star Jason Mercier has set a new record for successive weeks at number one on the Global Poker Index (GPI) 300 rankings after remaining on top for a ninth week.

The Team PokerStars Pro from Hollywood – who has 2,990.94 points – took over at the pinnacle on February 13 when replacing fellow States player Erik Seidel after the eight-time World Series of Poker (WSOP) bracelet winner had set the previous record at eight consecutive weeks on top during October and November of last year.

However, Las Vegas-based Seidel has since slipped to sixth place on 2,476.58 points as the top six spots on the GPI remain unchanged due to the Easter period slowing the poker calendar down, meaning just four events reported results for ranked players.

Mercier – who already holds the record for most weeks at number one – has increased his lead over second placed fellow Team PokerStars Pro Bertrand ‘ElkY’ Grospellier (2,794.27) to 196.67 points, even though the Frenchman was one of just four ranked pros to post a new result for this latest rankings list.

How is this possible? Well, the 31-year-old’s latest cash can’t be added to his overall GPI score because he already has four higher scores counting towards his Period 1 allowance.

Even though the Frenchman hasn’t lost his grip of second spot, he now has just a 42.84-point lead over third placed Shawn Buchanan, who remains in third on 2,751.43 points.

Eugene Katchalov stayed fourth on 2,576.69 points, while American duo David Sands (2,533.47) and Seidel held on to fifth and sixth respectively.

There was, however, some notable movement in the bottom half of the top 10, with American duo Steve O’Dwyer (at seventh on 2,424.36) and Noah Schwartz (ninth on 2,322.72), as well as Canadian Mike McDonald (10th on 2,305.99), climbing three spots respectively to shove Brooklyn’s Team PokerStars Pro Vanessa Selbst down eight places to 17th and Fabrice Soulier down six to 13th.

The 27-year-old American and Team Everest Poker Pro Soulier suffered their falls due to ageing results, with the Frenchman losing 174 points mostly down to his 11th place for $51,235 at last April’s EPT Berlin €5,000 buy-in No-Limit Hold’em main event dropping into Period 3.

Vanessa Selbst Falls Out of Top 10

Her third ageing cash – fourth place for $226,910 in the EPT London £20,000 buy-in No-Limit Hold’em High Roller at the Hilton London Metropole Hotel in October of 2010 – fell into Period 4 to see Selbst exit the top 10 for the first time since the end of last year.

Canadian Sorel Mizzi held on to eighth spot on 2,360.06 points, but Vegas-based O’Dwyer actually enjoyed the opposite effect to Selbst as his eighth place for $32,330 in last year’s Mohegan Sun main event aged into a vacant spot in Period 3 to boost his score.

The American’s steady progress up the rankings continued as that ageing score benefitted his Period 2 score, as well, as he still has the full complement of results in that level.

Incredibly, London’s Teng lost those places and 55 points after picking up $4,483 for finishing sixth at the Palm Beach Big Game £1,000 buy-in No-Limit Hold’em event at the start of this month, only to see his score suffer due to the ageing of two other earlier scores.

Raskin, of New York State, and Quebec’s Leah, meanwhile, cashed at the Foxwoods Poker Classic $2,325 buy-in No-Limit Hold’em Championship in Mashantucket, with the former taking 20th for $5,967 and the latter earning $11,603 in 11th place.

With those results counting towards their respective Period 1 scores, Leah was able to return to the GPI 300 for the first time since March 5, while Raskin climbed 11 spots into 146th.

Similar to Selbst, Sweden’s Anton Wigg saw several of his scoring events age. However, unlike the New Yorker, the Stockholm star secured the biggest points gain of 144 to take him to 126th after zooming up 46 spots – the second largest on the index – to 1,445.56 points.

However, as Wigg – who now has the full complement of Period 2 scores – had too many results for Period 1, he still holds the maximum four to boost his score significantly.

Additionally, with Wigg’s fourth place finish for $78,276 in the EPT Berlin €2,000 buy-in No-Limit Hold’em event from April last year ageing into Period 3 and his runner-up spot for $8,310 in the EPT London £300 buy-in No-Limit Turbo tournament back in October of 2010 falling to Period 6, he has enjoyed a notable climb up the rankings.

However, the most impressive movement was made by Slovenia’s Casey Kastle, with his ninth place for $23,765 in last year’s WSOPE €2,500 buy-in Six-Max No-Limit Hold’em dropping into Period 2 to give that level a healthy boost through adding a second result.

Of course, many pros lost ground on the players around them, including young Hungarian Marton Czuczor, who was hardest hit when falling 78 places down to 288th on 1,060.63 points.

The Budapest native’s sixth place finish for $44,424 in the €2,500 buy-in Six-Max No-Limit Hold’em event at last October’s WSOPE fell into Period 2 to leave him with no Period 1 scores.

But the biggest points loser was German starlet Philipp Gruissem, who slumped 21 places to 50th on 1,786.65 after dropping a massive 219 points.

Gruissem’s other four final table appearances saw him take fourth place or higher, but his third place for $95,355 at the EPT Berlin €10,000 buy-in Eight-Max Event has aged into Period 3 while his London success has dropped into Period 2 to leave him with just three results in Period 1.

Eleven-time WSOP bracelet winner Phil Hellmuth also suffered from ageing scores, with his seventh place for $32,305 in the same WSOPE event as Czuczor at Le Croisette Casino Barriere dropping into Period 2 to leave the 47-year-old with only one score in Period 1. As a result, Hellmuth loses 205 points and 39 places to now sit at 92nd on 1,543.63.

Vegas-based Dan Smith, meanwhile, lost 196 points to drop down 55 places to 166th on 1,304.60 after his fourth place for $95,967 in last year’s EPT London £10,000 buy-in No-Limit Hold’em Six-Max High Roller Turbo aged into Period 2 to knock out another score and leave him with a solitary result in the all-important Period 1,

Liv Boeree Down to 256th

Just three players made their debuts on the latest GPI 300, with Vegas pro Brent Hanks (on 1,039.34 points) and Romanian Robert Cezarescu (1,064.16) appearing at 299th and 286th respectively to join previously-mentioned Canadian Leah.

Five-time WSOP bracelet winner Cunningham returned to the rankings for the first time since January 9 at 297th on 1,042.10 points, while Vegas-based Cantu – a two-time WSOP winner – is back in at 296th on 1,042.54 after exiting at the same time as Cunningham.

Vietnamese-American Pham, who also has two WSOP gold bracelets to his name, returns at 298th on 1,039.43 points after last appearing on the GPI 300 late last month.