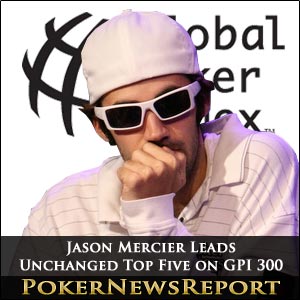 The 25-year-old star remains in the number one position on 3,014.34 points, ahead of fellow American Erik Seidel and Frenchman Bertrand ‘ElkY’ Grospellier, after losing just 0.74 points from last week.

Hollywood hero Mercier – who picked up $709,767 for taking down the $100,000 buy-in No-Limit Hold’em High Roller event at the 2011 Doyle Brunson Five Diamond World Poker Classic Bellagio in Las Vegas last month – can expect to remain atop the summit for the next few weeks, at least, although results from the PokerStars Caribbean Adventure will surely see some big changes further down the rankings.

Former Team Full Tilt Pro Seidel has not gained – or dropped – any points from his previous score, while Team PokerStars Pro Grospellier has closed the gap on the American to just 22.7 points by upping his total by 23.35.

Brooklyn-based Team PokerStars Pro Katchalov, meanwhile, has seen his score increase by 93.66 points to increase his lead over Nottinghamshire’s Trickett – the winner of September’s €8,500 buy-in No-Limit Hold’em main event of the Partouche Poker Tour (PPT) stop at the Palm Beach Casino in Cannes for $1,364,666 – to 167.52 points from the previous gap of 73.86.

There was, however, some notable movement in the top 10, with Canadian Shawn Buchanan leaping two places to sit in sixth on 2,430.85, despite seeing no change in his points, while Brooklyn’s Vanessa Selbst (2,412.31) – who is a Team PokerStars Pro – and New York State’s Will ‘The Thrill’ Failla (2,359.99) dropped one and two places respectively to stand at seventh and ninth.

Matt Waxman Up One Place to Eighth

Poker fans should watch out, however, for significant movement further down the rankings after Arizona-based stock trader John Dibella emerged victorious from the $10,000 buy-in main event at the PCA for $1,775,000 at the Paradise Island’s Atlantis Resort and Casino.

San Jose’s Faraz Jaka, who finished third for $755,000 in the above event, will surely climb back into the top 300 after falling out on the latest update, while the 18th place secured by Ohio’s Byron Kaverman (1547.27) ought to see him move up from his current position of 91st on the GPI.

Additionally, with Ukrainian Leonid Bilokur collecting $1,134,930 for taking down the PCA $25,000 buy-in High Roller event, expect to see him increase his points total, too, as will Jonathan Duhamel – who has enjoyed a fantastic trip to the Caribbean.

That’s an incredible $1,205,970 earned by the 24-year-old in just over a week – and is particularly astounding considering he was so badly beaten just before Christmas when his Quebec home was broken into by robbers, including former girlfriend Bianca Rojas-Latraverse.

WSOP main event champion Pius Heinz, of Germany, finished fifth in the $5,000 No-Limit Hold’em 8-Max event at the PCA for $45,980, so will undoubtedly return to the top 300 after dropping out of the latest list now that his November Nine success (which is included on the July set of results) has dropped into Period 2.

There are 10 new names on the latest GPI list, with Pennsylvania’s Dan Shak leading the way in 267th place on 1,069.61 points after he finished as runner-up to Swedish [geolink href=”https://www.pokernewsreport.com/online-poker-rooms”]online poker[/geolink] specialist and Team PokerStars Pro member Viktor ‘Isildur1’ Blom in the PCA $100,000 buy-in Super High Roller event.

Martin Staszko Drops Out of Top 300

Czech Republic star Staszko – as with fellow Team PokerStars Pro Heinz – has been hit hard after all five of his cash finishes at last summer’s WSOP also dropped into Period 2, meaning a hugely significant reduction in his points total.

The American also recorded a 64th place finish in the PCA main event, so expect him to move up again from his current position of 115th.

Uruguay’s Fabrizio Gonzalez, unfortunately, showed the biggest drop down the rankings, with the Montevideo native falling 95 places to 297th on 1,016.75 points.

The South American’s 22nd in event #57, a $5,000 buy-in Pot-Limit Omaha Hi/Lo tournament back in early July, at the WSOP dropped into Period 2 to leave him with only one Period 1 result.

Vegas-based Ben Lamb – last year’s WSOP Player of the Year – dropped 60 places to 105th on 1,466.25 points after his third place in the main event fell into Period 2, meaning he now has no scores in Period 1.

Don’t forget to check back here every week for the latest developments on the GPI.