Mercier has held on to the GPI 300 top spot for a seventh successive week – having overtaken fellow American Erik Seidel back on February 13. 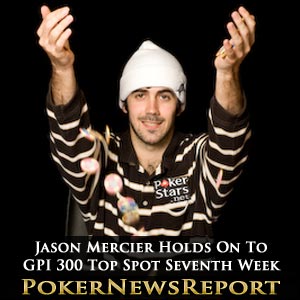 Jason Mercier has held on to the Global Poker Index (GPI) 300 top spot for a seventh successive week – having overtaken fellow American Erik Seidel back on February 13 – as early spring saw a lack of scoring events to leave the top 16 unchanged.

Team PokerStars Pro Mercier, of Hollywood, stayed put on 2,980.42 points, with the remainder of the top 10 – including Seidel (2,510.57) in sixth place – also seeing no change in their overall points scores.

With just two events providing results for the latest GPI rankings list, there isn’t any movement inside the top 20 until reaching American Matt Waxman, who has climbed two spots to 17th on 2,200.88 points, leapfrogging Roger Hairabedian (2,158.00), of Marrakech, and Finnish pro Juha Helppi (2,173.56) – who fall one place each to 19th and 18th respectively.

While the leading pros in the rankings didn’t make much movement, further down the list things are a bit different as ageing scores did produce a little turmoil for some well-known names – including Simon Ravnsbaek, Rob Akery, Tristan Clemencon and Marc Inizan.

Unfortunately, with two significant holidays approaching, early April will also be fairly quiet as far as major scoring events are concerned, with the PokerStars.it European Poker Tour (EPT) Campione main event the one notable exception for the next GPI 300 list.

Five players inside the top 200 of the GPI should certainly make big moves on the next rankings list after the conclusion of the latest EPT stop for the €5,000+€300 buy-in No-Limit Hold’em main event in Campione, where New York’s Olivier Busquet (35th on the GPI on 1,941.97 points) finished as runner-up to Danish pro Jannick Wrang.

Back to this latest GPI, though, and the tournaments supplying results were the $2,200 buy-in Battle at the Beach Six-Max No-Limit Hold’em event in Florida, and the R$9,600 Latin American Poker Tour (LAPT) IV No-Limit Hold’em High Roller in Sao Paolo, Brazil.

Moving outside the top 20, Argentinian Team PokerStars Pro Leo Fernandez climbed 74 places to 69th on 1,650.84 points after besting a 36-player line-up at the LAPT IV High Roller in Brazil for $71,717.

The Buenos Aires pro added 253 points to his total with that Period 1 score to make the biggest jump of the week, while Bulgarian Rumen Nanev – who finished fifth for $19,382 in the same event – has secured his first appearance on the GPI 300 in 270th on 1,082.15 points.

Agrentinian Barbero was last ranked on January 30, while American Kellstrom last appeared on January 2 and Belgian Kitai was previously on the list back on February 27.

The second biggest points gain belongs to Russian Dmitry Vitkind, who climbed 28 places in to 96th on 1,556.74 after picking up 88 points as three results aged positively.

Meanwhile, 11-time World Series of Poker (WSOP) bracelet winner Phil Hellmuth has shot up 12 spots into 51st on 1,748.27 points, although that is still some way behind his highest placing of 15th back on December 19 last year.

The 47-year-old from Wisconsin – who has not made a great start to 2012 – has seen his ranking drop steadily since as his fabulous set of results from last year’s WSOP have aged into Period 2.

Having had no results scoring in Period 3 and far too many to be included in the points scoring system in Period 2 – because of his amazing WSOP – that Wynn result has now been counted to give him his points boost.

Simon Ravnsbaek Drops Down to 135th