Jason Mercier has blasted back to the head of the Global Poker Index, leaping two places to knock Bertrand Grospellier off the top spot he held for two weeks. 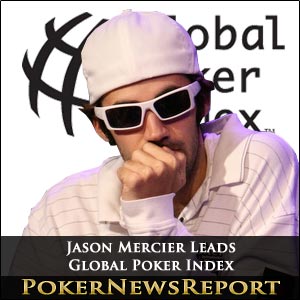 American poker star Jason Mercier has blasted back to the head of the Global Poker Index (GPI) 300, leaping two places to knock Frenchman Bertrand ‘ElkY’ Grospellier off the top spot he held for two weeks.

The 25-year-old Team PokerStars Pro from Hollywood is in fact the third player to hold the pole position on the GPI in just four weeks, following on from Triple Crown winner Grospellier and fellow American Erik Seidel, although the new number one was also top back in mid-October.

Mercier’s second WSOP bracelet arrived this past summer when he took down the $5,000 Pot-Limit Omaha Six-Handed #35 event at the Rio All-Suite Hotel & Casino in Vegas for $619,575.

The London-based Grospellier lost 24.27 points and one place to be on 2,477.48, while eight-time WSOP bracelet winner and Vegas native Seidel fell down to third from second spot, even though his points total remained at 2,470.40.

The immediate standings on the GPI 300 shouldn’t change too much over the next few weeks as the live poker schedule enters a lull during the festive season, although Mercier’s WSOP win back on June 22 will drop into Period 2 and possibly see fellow Team PokerStars Pro Grospellier return to the top spot.

Other ageing WSOP scores for players will also fall into Period 2, so there could well still be a few drops and promotions before the PokerStars Caribbean Adventure (PCA) kicks off on January 5 at the Atlantis Resort and Casino on The Bahamas

Shawn Buchanan Moves up One Place to Sixth

But Canadian Shawn Buchanan overtook American Sam Stein in sixth spot – even though he lost 2.44 points from his previous total to sit on 2,310.72.

Another Englishman, PartyPoker and PokerStars regular Chris Moorman, fell one spot to ninth on 2,207.28 – which was in fact an increase of 73.93 points – to sit just 0.21 behind Mizzi, while a third Canadian, Matt Marafioti, completed the top 10 with the same points total as last week, 2,069.71.

As we always note at Poker News Report, with so many players moving up dramatically, there is always a reverse reaction as pros drop down the rankings.

Unfortunately for Muscovite Lykov, his 38th place in the $5,000 buy-in No-Limit Hold’em Shootout, event #24 at this summer’s WSOP, has now dropped into Period 2 on the GPI to leave him without a score in Period 1.

However, the 13 new names on the GPI 300 will be greatly encouraged by making the latest rankings this week.

Remember to check back here every week for the latest developments on the Global Poker Index.