Jason Mercier took the top freeroll prize of €50,000 worth of tournament buy ins for the PokerStars European Poker Tour Season 8. 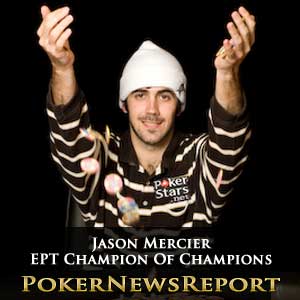 Despite a field of fifty European Poker Tour players, and the fact it was Friday the 13th, the 24 year old Jason Mercier still managed to retain enough luck to win the EPT Champion of Champions. Mercier took the top freeroll prize of €50,000 worth of tournament buy ins for the PokerStars European Poker Tour Season 8. Mercier managed to beat a well stacked final table which included Brandon Schaefer and Michael Tureniec, recent winner of the EPT Copenhagen. Only the top 4 finalists managed to cash, with Sandra Naujoks falling just short of the bubble in 5th place.

Despite being long time chip leader, beautiful London girl Victoria Coren departed in fourth place after a bad beat; her pocket 8s losing out to to Galen Hall‘s K2. However, the Guardian columnist and Team PokerStars pro still walked away to €10,000 in EPT buy ins. Max Lykov hit the rails next, leaving the two Americans to go heads up for first place.

“I’m extremely happy” Mercier commented on his win, “It was a tough tournament. Really good players came out and, when we got deep, I did think at one point that I was going to bubble it.”

Mercier was named Bluff Poker Magazine Player of the Year in 2009, and is currently ranked as third most successful player in the world by ESPN. He has taken first place wins at the 2009 L.A. Poker Classic, the Wynn Classic, the 40th World Series of Poker, EPT London, the Doyle Brunson Five Diamond World Poker Classic, the 2010 Southern Poker Championship and the PokerStars North American Poker Tour.

Qualifiers for Season 8 of the European Poker Tour are already up and running at [geolink href=”https://www.pokernewsreport.com/pokerstars”]PokerStars[/geolink].

The EPT Champion of Champions payouts were as follows: