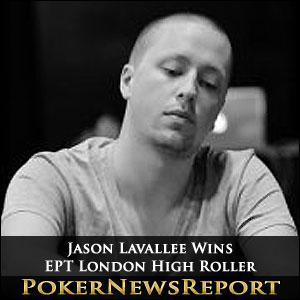 Joe Stapleton, the color commentary for the PokerStars.com European Poker Tour, likes to point out that no one has ever won two EPT Main Events. But the way Jason Lavallee has been tearing up the scene of late, few would be surprised if he were the first. Despite never winning a main event (yet), in the past 12 months the young all-star finished runner-up in the San Remo Main Event, third in two EPT Berlin side events and now first in the EPT London £10,000 High Roller. His victory was good for nearly £358k and the title of champion.

Steamrolling a high roller field is no small feat. When the likes of Sorel Mizzi and legend David “Devilfish” Ulliott are among the remaining 12 participants, it becomes all the more difficult. But that’s exactly what Lavallee managed to do, albeit with the help of a little luck.

On the first hand of play, Lavallee raised UTG. The pot was re-raised by Frederik Jensen before Mark Teltscher shoved. Lavallee had the good sense to fold, and Jensen called. Holding 5♠5♥, Jensen spiked a set on the turn, cracking Telscher’s A♦A♠. This hand set the tone for what would be an exciting and dramatic day of poker.

Ariel Celestino would be the first victim of the day, followed shortly by Antonio Lafosse. Jensen would be eliminated in tenth, this time running into Ulliott’s aces. The former EPT Madrid champion held Q♠Q♥ but would receive no help in what amounted to a devastating cooler. After winning that hand, Ulliott was sitting on a cool 1.2 million chips.

Sorel Mizzi would start the final table as a slight chip leader over Day 2 chip leader Carla Sabini. Ulliott resided in third, and the other six players weren’t too far behind. Talal Shakechi would finish in ninth. The victim of a horrific bad beat, Shakechi lost the majority of his chips when his A♣K♠ was flushed away by Luca Pagano’s A♦K♦. On the next hand, he jammed for his remaining chips and was looked up by Mizzi. The board bricked out and Mizzi’s Ace-high was best.

It was then that Lavallee began to take over. The young Canadian three-bet to 138,000 after Mizzi raised to 48k on the button and Ulliott called from the small blind. Mizzi then four-bet to 280,000, which prompted Ulliott to fold and Lavallee to jam.

What at first looked like a leveling contest proved to be a cooler. Mizzi would snap call with Q♣Q♦, only to be stunned when Lavallee revealed A♣A♠. The board ran out low and Lavallee doubled up to nearly two million chips. Almost as important, Mizzi, arguably the best player at the table, was now crippled. Little did anyone know, Mizzi would ultimately make a rousing comeback.

Despite this, it would be Teltscher that would be knocked out next when his {Ks]K♦ ran headlong into Lavallee’s K♣K♦. The flop produced a Q♠, but Teltscher received no additional help on the turn and river and was bounced in eighth. His finish was good for £44,775. Soon after, Team PokerStars pro Luca Pagano would get it all-in holding a straight flush draw against Lavallee’s bottom two pair. Pagano would not connect and would have to settle for seventh.

Then came the hand of the night: Sorel Mizzi jammed for 555,000 on the button. Ulliott, after thinking about his decision for quite some time, ultimately called with J♠J♦. Lavallee then came over the top, announcing that he was all-in. Ulliott was faced with a critical decision for his last 900k. After several minutes of deliberation he finally called, only to find that he was crushed by Lavallee’s K♥K♣.

After a flop of A♥8♥8♦ worst would go to first. Mizzi’s top pair would hold, and with 1.6 million in chips, he was right back in the thick of things. Lavallee would win the very sizeable side pot and Ulliott was eliminated in sixth.

Tamer Kamel, who was riding a very short stack, seemed content to move up a money spot. He would eventually be eliminated in fifth. Long time chip leader Carla Sabini would go out in fourth; another victim of Lavallee.

On a prior hand, Lavallee called down Sabini’s river bluff, crippling her in the process. He delivered the knockout blow when his A♣10♣  triumphed over Sabini’s 7♥7♦. In a cruel twist of fate, the board doubled paired, ultimately leaving Sabini with seven-high.

Lavallee then knocked out Mizzi when the latter four-bet all-in with pocket eights and was called by Lavallee, who was holding A♦J♠. Lavallee, who seemingly couldn’t miss all day, flopped a Jack. The turn and river provided no help to Mizzi, as he would have to settle for a £161,560 third-place finish.

The heads-up battle was rather anticlimactic, as Lavallee held an insurmountable 20-to-1 chip advantage. Several hands in, Lavallee jammed with A♣9♠ and was looked up by Simon Higgins K♣J♣. Higgins flopped a flush draw, but the turn and river were bricks, and Lavallee was pronounced the winner.

Playing well and running better, Lavallee seemed destined to win his first major tournament title. Apparently relieved to finally get the tournament monkey off his back, Lavallee joked So this is what it feels like the win a tournament.

Looks like they’ll be a host of Canadians celebrating in London tonight – you don’t see that too often.