Day 1B of the WPT World Championship saw a further 223 players enter (or re-enter) the action, with Jason Koon leading the field at the end of the night. 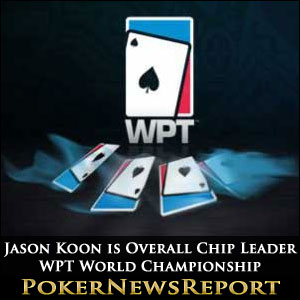 Day 1B of the WPT World Championship saw a further 223 players enter (or re-enter) the action, with Jason Koon leading the field at the end of the night.

Yesterday saw the second of two opening flights played in the $15,400 buy-in WPT World Championship; with entry not only available to new players, but also those who bust out on Monday´s Day 1A.

Consequently, players such as Chris Moorman, Lily Kiletto and Jared Jaffee were able to fire a second bullet and carry chip stacks through to Day 2; while some others who also fired second bullets – Noah Schwartz, Guillaume Darcourt, Mohsin Charania and Ryan Reiss – were last seen heading for the airport to catch a flight to the EPT Grand Final in Monaco.

Not an Outstanding Day for PartyPoker or the WPT

Sadly for the organizers, the total number of entries for the event (328) failed to cover the $5 million guarantee without the WPT taking a hit on the rake. The full prize pool and payout list will not be announced until later today, but it is estimated that the WPT will need to use about 60% of the fees paid to enter the tournament to shore up the guarantee.

The lower-than-expected attendance reflects badly on PartyPoker – who, as the leading online poker site in New Jersey and event sponsor, failed to inspire their recreational players to qualify for the event. Many of their online satellites offering Championship seats had ridiculously high buy-ins, and they were used by players who could afford to buy-in directly in order to qualify for the event on the cheap.

Meanwhile, At the Tables …

Similar to Monday, a plethora of top professional poker players rolled into the Borgata Casino, Hotel and Spa to compete in the WPT World Championship, and again there were some very interesting table pairings – WPT Champions Derrick Rosenbarger and Jared Jaffee were drawn alongside Eddy Sabat and Kara Scott, while Vinny Pahuja and Matt Affleck could be found at the same table as Eugene Katchalov and Kevin Saul.

There were also some quite astonishing hands during the early levels of action. Amanda Musumeci tweeted that she had turned a Full House on the first hand of the day, only for the pot to be chopped when a two-outer fell on the River, Kara Scott lost a substantial amount of chips in a Boat > Boat hand before the end of Level 1, and Zo Karim reported that he had come second in a Straight Flush > Straight Flush hand.

Chip Leaders Change Throughout the Day

Ronit Charmani, who is donating a percentage of her winnings to the charity “Food Gardening”, started the day well – cracking Julian Thomas´ Aces with a flopped set of Queens – and she was the early chip leader until Kevin Rabichow hit Quad Kings to take a massive pot from last week´s WPT Seminole Showdown winner Eric Afriat.

In the post-dinner action Kevin Saul eliminated Vinny Pahuja 6♦ 5♠ > A♠ 8♠ after flopping an Eight-high straight, Lee Markholt temporarily took the chip lead before doubling up John Hennigan 8♠ 8♣ > 6♥ 5♥ (Markholt flopped two pairs – Hennigan flopped a set), and when the chips were bagged and tagged at the end of the night, Jason Koon had established a fifteen big blind advantage at the top of the leaderboard over every blogger´s nightmare – Athanasios Polychronopoulos.

Looking Ahead to Day 2 of the WPT World Championship

When Day 2 of the WPT World Championship gets underway later today, the 200 surviving players will be entering Level 9 (blinds 600/1,200 – ante 200). Only six 75-minute levels are scheduled on Day 2, so it is improbable that we will be any closer to determining who the winner will be. Those who will suspect will still be involved as the tournament moves towards the money on Thursday include: