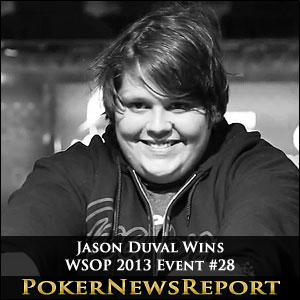 It took just six hands of final table play for there to be a casualty, with Joseph Cappuccio being eliminated from the event. Cappuccio went all in before the flop with K♠ Q♠, but unfortunately for him, Tommy Townsend was waiting in the wings with A♦ A♣.

Cappuccio hit an open ended straight draw on the turn, but Townsend’s Aces ultimately held on the board and Cappuccio was knocked out of the tournament in ninth place.

Just two hands later, Daniel Bishop was knocked out of the event in eighth place by Dan Martin. Martin called Bishop’s all in before the flop with K♠ 6♥, while Bishop showed Q♦ J♠. While Martin was already ahead, he managed to hit a pair of Sixes on the pair, putting an exclamation mark on the hand and eliminating Bishop from the event.

The remaining final table players did not leave so fast, and it took nearly an hour of action for the third player to be eliminated. That accolade went to Stephen Bartlett, who was knocked out of the tournament by Majid Yahyaei.

Yahyaei hit a pair of Aces on the flop with his A♠ Q♥7, which was enough to beat Bartlett’s K♠ 8♣ and send him out of the event in seventh place.

Martin was next to go when he was eliminated by Jason Duval in sixth spot after being outkicked. Martin moved all in before the flop with A♦ 5♥ and was called by Duval, who showed A♥ 8♥. The 8♣ on the flop gave Duval a pair, which put him further in the lead and eventually won him the hand after the turn and river did not help Martin.

Yahyaei went on to claim his second final table scalp soon after Martin’s exit by knocking Townsend out of the event. Townsend, who had 6♦ 6♠, raised to 125,00 pre flop, which was flat called by Yahyaei, who had 8♦ 2♦ in the big blind.

James Lee was relatively quiet at the final table, but when he picked up A♠ K♦, he made himself heard by moving all in before the flop. Unfortunately for him, there could not have been a worse time to have that hand as Masayuki Nagata had A♦ A♣, and he called.

Lee received no help on the board as he aimed to dodge Nagata’s bullets and, just like that, he was eliminated from the tournament in fourth place.

While he chipped up to over 2.2 million chips, Nagata did not go far. In fact, the Japanese player was knocked out of the event just two hands after knocking Lee out. It came at the hands of Duval, who despite initially being behind, put Nagata down to just over 100,000 chips after hitting a straight in a showdown between the two players.

Nagata decided to go all in with A♠ 2♣ the very next hand and was again called by Duval, who again was behind with J♣ 3♦. He hit a pair of Jacks on the flop, however, which was enough to win him the hand and eliminate Nagata from the event.