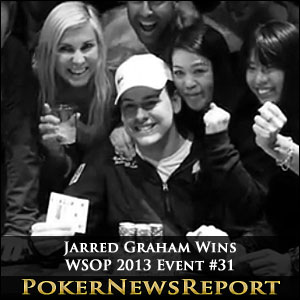 Anyone who has followed the Main Event over the past ten years is likely familiar with the chant “Aussie! Aussie! Aussie!” Popularized by Joe Hachem during his historic 2005 Main Event run, the phrase became the rallying cry of Australian poker fans everywhere as they rooted on their eventual champion. Since then, Aussies haven’t had the best of luck in the WSOP – at least until now. Railed by his close friend Hachem, Aussie Jarred Graham took down Event #31 – Pot-Limit Omaha Hi-low Split 8 or Better (O8).

Graham, who is a cash game specialist in his native Australia, met Hachem on the green felt and quickly struck up a friendship with the grizzled veteran. Having such a seasoned pro on his side probably helped Graham adjust to the grandiose stage that is a WSOP final table, as it was his first major final table in the States. However, young Graham was no stranger to big buy-in tournaments, having competed in a slew of multi-thousand dollar buy-in events in his native Australia.

Graham waded through over 900 players on his way to the final table, many of whom were multiple bracelet winners. After two action packed days of play, the massive field was whittled down to a paltry 14 players. Within four hours of play, five more players were eliminated, and the final table lineup had been set. Among the remaining nine players were multiple bracelet winners and poker icons Perrry Green and Barry Greenstein.

For the first hour, no one gave an inch. Greenstein would eventually eliminate Green in ninth, but needed the help of a miracle card to do so. From there, players fell in rapid succession. Joao Simao, Eric Rodawig and Loni Harwood were the next three players to go before Macro Johnson would eliminate Gabriel Blumenthal in fifth and Graham would bounce Noomis Jones in fourth.

Then, as has commonly been the case in this year’s WSOP, three handed play proved a grueling affair. Eventually, after numerous all-ins that either saw the short stack double up or chop, Graham was able to outflop Barry Greenstein’s pocket rockets and eliminate him in second place. Does Barry ever not get cracked when holding Aces?

After being the short stack when play began on Day 3, Graham has accumulated 80 percent of the chips in play, proving too much for Marco Johnson to overcome. On the final hand of the match, Johnson raised with 4-7-3-A rainbow, and Graham reraised with A-K-5-K (two diamonds). The flop came 9-T-3 (two hearts) and Graham quickly put Johnson all-in. Reasoning that he had the odds to call, Johnson pushed his remaining chips in the middle. The turn gave Graham a set and the match was over. Graham’s victory was good for $255,942 and the pride of his countrymen.

Notably, this was Marco Johnson’s third second place finish in a WSOP bracelet event. He has yet to win poker gold. Better luck next time!