The six-handed final table of the WPT BestBet Jacksonville Fall Poker Scramble is headed by Jared Jaffee after he finished strongest on Day 3 of the event. 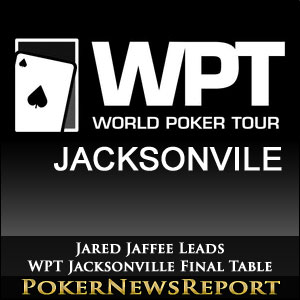 The six-handed final table of the WPT BestBet Jacksonville Fall Poker Scramble is headed by Jared Jaffee after he finished strongest on Day 3 of the event.

Twenty-six players returned for Day 3 of the WPT BestBet Jacksonville Fall Poker Scramble and, after twelve hours of play, just six remain in the chase for the $252,749 first prize – headed by this year´s Aria Championship winner, Jared Jaffee.

Jaffee enjoyed an incredible last couple of levels, during which time he went from a mid-table stack of 858,000 chips to 3.65 million chips, and he will take more than double the number of chips to the final table than his closest rival, Margo Costa.

Day 3 of WPT Jacksonville Gets Underway

Day 3 of the WPT Jacksonville Scramble got underway with Cong Pham heading the event, as he had done virtually from the close of play on Day 1A. Behind Pham in the chip counts were experienced professionals Matt Glantz and Jeff Masden, but it was a relative novice, Margo Costa, who was the first player to make an assault on the top of the leaderboard – eliminating Jacquelyn Scott in twenty-sixth place A♥ J♠ > K♥ 10♥ to be the first player to breach the one million chip barrier.

By the beginning of Level 21 (blinds 6,000/12,000 – ante 2,000) the field had been reduced to just twenty-one players, and the next exit was to be sensational – that of overnight chip leader Cong Pham. Pham had been reduced to just 80,000 chips when he had doubled-up Matt Oswalt, and it was Oswalt who delivered the killer blow to Pham´s chances of a recovery – calling Pham´s 10♣ 9♥ shove with Q♣ 9♦ and pairing his Queen on the river.

Matt Oswalt went on to temporarily take the chip lead with the elimination of Jacob Bazeley in eighteenth place (J♠ 10♠ > A♦ 9♣) but, by the end of the level had been joined by Matt Glantz who took three streets of value from Randall Price with A♦ A♥, and Ryan Eriquezzo – who bust Paul Balzano in seventeenth when his A♥ 8♥ rivered trip Eights to best Balzano´s A♦ 9♣.

Level 22 is All About Aces

Level 22 (blinds 8,000/16,000 – ante 2,000) saw the rise of a second woman player aiming to be the first female to win an open WPT Main Event (there has been more than 200 so far!). Corrie Wunstel knocked Matt Oswalt from the top of the leaderboard when her K♣ J♣ flopped top pair to double up against Oswalt´s A♥ 10♥, and she then doubled up for a second time in the level when her A♦ A♠ held against Matt Glantz´s Q♦ 8♦.

Aces were also good for Blake Purvis when he knocked out Jeff Masden in fifteenth place A♣ A♥ > A♦ Q♦, but not for Derahn Sikes – whose A♥ A♣ was cracked by Michael Horchoff (A♦ K♠) one hand prior to Sikes being knocked out by Matt Oswalt Q♠ Q♥ > J♣ J♥. Within the level, Randall Price also started his recovery after running onto Matt Glantz´s Aces (above), and he was responsible for the elimination of Andrew Whittaker in thirteen position 3♥ 3♣ > A♣ 6♣ after the flop had delivered J♣ 9♣ 3♠.

Glantz Bust – Jaffee on the Rise

As the ten remaining players converged on one table, the previously anonymous Jared Jaffee woke up and started bossing events. In the space of twelve hands he had moved up into second position on the leaderboard with a series of aggressive post-flop bets and a post-Turn shove that forced Thad McNulty out of a valuable pot and reduced him to just 8 Big Blinds.

Jared Streaks Ahead with Queens

Jared Jaffee moved to the top of the leaderboard after the dinner break (now Level 24 blinds 12,000/24,000 – ante 4,000) with the elimination of Thad McNulty in tenth position K♣ Q♣ > J♥ 10♥; but he was soon being pursued by Blake Purvis (who flopped a diamond flush and took three streets of value from Margo Costa) and Randall Price, who bust David Diaz in ninth A♠ K♠ > A♥ 10♠.

A pair of Queens enabled Jared Jaffee to take a 700,000 chip pot from Randall Price and open up some space between him and the chasing pack and, when he eliminated Ryan Eriquezzo in eighth A♠ Q♠ > 7♣ 7♦, that gap grew to more than fifty big blinds over his nearest rival. The day concluded with Margo Costa sending Matt Oswalt to the rail in seventh A♦ 10♣ > Q♦ 10♦ and the final table of the WPT BestBet Jacksonville Fall Poker Scramble was set.

When play resumes this afternoon, the six remaining players will be a few hands into Level 26 (blinds 20,000/40,000 – ante 5,000). Much of the interest in the final table will concern whether Margo Costa or Corrie Wunstel can become the first lady winner of a WPT Main Event, but first they will have to catch runaway leader Jared Jaffee.