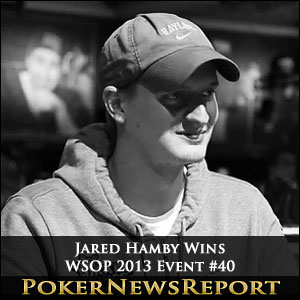 David Nicholson was the first player to exit the final table after he was eliminated by Matt Berkey around half an hour into final table action. Nicholson, who had A♥ Q♥ went all in pre flop and was called by Berkey, who had J♠ J♦. Berkey’s Jacks held on the 4♥ 10♠ 2♦ 9♠ 4♦ board to win the hand and knock Nicholson out of the tournament in ninth spot.

Next to go from the final table was Fred Berger, who finished up in eighth place after losing his final hand to Richard Dubini. With K♠ Q♠, Berger hit two pair after K♥ J♥ J♦ came on the flop, but unfortunately for him, Dubini had A♦ A♣, giving him the higher two pair. The 6♦ on the turn and 7♥ on the river did not help Berger and he was eliminated from the event.

Berger’s elimination did not keep Dubini in the event for long, however, as he knocked out just three hands later at the hands of Jared Hamby. Dubini flopped a pair of Queens, but it no match for Hamby’s two pair, which won him the hand and eliminated Dubini from the event in seventh place.

Hamby then went onto claim his second successive final table scalp after he knocked Berkey out of the tournament in sixth spot. Berkey, who was down to his final 355,000 chips, moved all in before the flop with K♣ 4♦ and was called by Hamby, who outkicked him with K♥ J♣.

Already ahead pre flop, Hamby cemented his lead strongly after two Jacks came on the flop, giving him three of a kind. That meant Berkey’s time in the tournament was effectively over, something which was confirmed when the 6♦ came on the turn and the A♣ came on the river.

Fifth place went to Joao Dorneles Neto, who was knocked out by Peter Hengsakul. Hengsakul, who had 7♦ 7♥,hit a set on the flop when they 7♠ was one of the first three cards shown. Neto, on the other hand, hit a pair of Aces on the flop with his A♣ 8♣.

Neto moved all in after the turn, which came 5♠, and was instantly called by Hengsakul, whose set stood on the river to win the hand and eliminate Neto from the event with $120,574 for his efforts.

Nicolas Fierro was the next player to be eliminated after losing a showdown to Allan Vrooman. Fierro moved all in before the flop for 170,000 with A♣ 5♠ and was called by Vrooman, who had Q♥ Q♣. Hengsakul, whose stack dominated both players, also took part in the showdown with 7♥ 7♠.

While both Hengsakul and Fierro hit straight outs on the turn, the Q♠ came on the river, which gave Vrooman a set. That won him the hand and sent Fierro packing from the table in fourth place.

Vrooman’s win chipped him up to around 1.6 million chips, but that did not help him in three-handed as he only lasted another three hands before being eliminated by Hengsakul. With 8♦ 8♠, Vrooman raised to 125,000 before the flop and was reraised to 375,000 by Hengsakul, who had K♥ Q♥.

This led to Vrooman moving all in and he was called by Hengsakul after a moment of thinking. The 9♥ A♣ 10♠ flop and the 9♠ on the turn kept Vrooman in the lead, but gave Hengsakul an inside straight draw. Hengsakul would hit his draw on the river when the J♥ was shown, knocking Vrooman out of the tournament in third place.

The elimination left Hengsakul and Hamby as the last two players in the event, with Hengsakul having a chip lead of over 4.5 million when heads-up play began. The huge lead did not deter the eventual winner, however, and he soon found himself in the lead after a number of hands went his way.

In the last hand of the tournament, Hengsakul went all in before the flop with 5♦ 5♣ and was called by Hamby, who showed K♠ 10♠. The Q♠ 6♦ 4♦ on the flop kept Hengsakul’s hand in front, but that all changed on the turn when the K♣ was shown.

The 7♥ on the river kept Hamby’s hand in the lead and Hengsakul settled for runner up while Hamby was crowned the winner of the event.