Jamie O´Connor made up for being the Final Table bubble boy in last year´s GUKPT Blackpool Event by taking down Leg 11 of the Grosvenor UK Poker Tour in Luton. 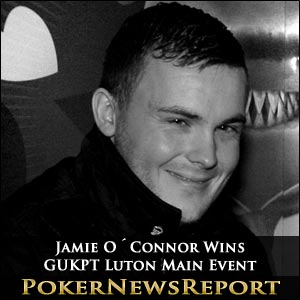 Jamie O´Connor made up for being the Final Table bubble boy in last year´s GUKPT Blackpool Event by taking down Leg 11 of the Grosvenor UK Poker Tour in Luton.

An explosive final day at the GUKPT Luton Main Event saw a final table of nine reduced to one within four hours. Dean Swift had taken a massive chip advantage to the final table after eliminating players in tenth, eleventh and twelfth on the penultimate day, while Luke Schwartz – who had been storming the event from Day 1 – had gone in the opposite direction due to doubling up Andrew Hills and Tim Blake.

Andrew Hills was the first player to spark into life – four-bet shoving and forcing a fold from Dean Swift to take his stack over 500,000 – before Swift (10♦ 6♦) flopped a diamond flush to eliminate Tom Myland (K♦ Q♥ – flopped top pair) in ninth position and take 30K chips back from Hills. Andrew Hills lost more chips when he called Shaun Conning´s 97,000 chip shove and then folded when Tim Blake moved all-in over the top for half a million chips. Blake´s pocket Queen´s were good enough to see off Shaun Conning´s pocket Fours.

Tim Blake (4♥ 4♠) then took over the chip lead when rivering a flush to bust Mark Karoullas (6♦ 9♦) in seventh, but was quickly joined by Jamie O´Connor who eliminated Andrew Hills in sixth and Luke Schwartz in fourth (AK > Q6) – Schwartz having just busted Mitch Johnson in fifth (88 > A2) in fifth. Meanwhile, Dean Swift, who had wisely folded his Ace high hand against Tim Blake´s pocket Aces, pulled out an important double-up when moving all-in from the small blind with 5♥ 10♦ against Tim Blake´s 3♣ 3♦ and catching a Ten on the flop.

155 players paid up the £1,000 entry fee or qualified online for the GUKPT Luton Main Event, and the field included such notables as Julian Thew (who took down the 6-Max side event) Ben Vinson, Dave Ulliott, Roberto Romanello and Sam Grafton. The next leg of the Grosvenor UK Poker Tour takes place in Blackpool in two weeks time – just time enough for those who cashed in the Luton event to finish counting their money!