Jamie Gold to be Tropicana Spokesman 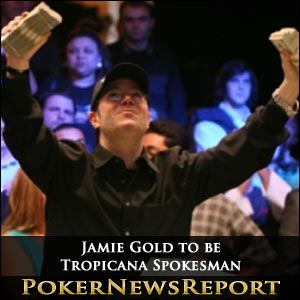 Jamie Gold is scheduled to appear at the Tropicana daily until the middle of January to promote the new “Jamie Gold Poker Room,” which the casino re-named in Gold’s honor. The casino is currently running promotions to celebrate the re-launching of its poker room, including the opportunity for poker players and fans to play against Gold with buy-ins as low as $100.

“The ownership and management of the new Tropicana, as well as Jamie, have an incredible vision for this relationship,” Gold’s agent, Randy Kasper, said in a press release. “This deal is by far the biggest of its kind and the poker world will be shocked by many of the components as they are unveiled.”

Gold won the 2006 WSOP Main Event in a brash style that was both applauded and criticized by industry veterans. Under the tutelage of poker pro Johnny Chan, Gold embraced a table-talking aggressive style that goaded his opponents into calling his wagers when he played a strong hand and into folding when he held weak cards.

Gold has been using his fame and donating his time toward charitable efforts as of late, “focusing on raising money around the globe for worthy causes,” he said. “It has been so rewarding; I couldn’t begin to put it into words. I will continue to live up to my nickname as ‘The Poker Philanthropist’ while at the same time getting back to the game I love which has given me countless opportunities.”

“This deal with Tropicana covers everything I could have ever wanted in a relationship with a major Las Vegas Strip resort and it will serve as my anchor and the conduit to all of my future poker and philanthropic endeavors,” Gold added. “I really couldn’t be more excited!”

The Tropicana has recently been investing millions of dollars in renovations, including the new Jamie Gold Poker Room. Poker tournaments are offered four times daily, mostly no-limit hold’em, but there are a few other types of poker games mixed in such as HORSE Poker and Razz Poker.

“We’re thrilled to welcome Jamie to the Tropicana family,” stated Melissa Steinberg, vice president of entertainment and casino operations at Tropicana Las Vegas. “This new poker room is sure to not only create unique and memorable gaming experiences for our guests, but will also give them the opportunity of a lifetime to play with one of the most iconic poker players of our time.”

Gold recently launched a free-play online poker site, FreeGoldPoker.com, that awards cash and prizes to winners, but is prohibited from offering real-money play. It is not known whether plans are in the works to consolidate marketing efforts between the Tropicana and Gold’s free-play poker site when online poker becomes regulated in the U.S. Nevada has begun accepting applications for intrastate poker operator licenses that will allow cash play to Nevada residents, initially. Many casinos are currently preparing to enter the online poker market by partnering with established overseas gaming companies. 888 Poker has joined Caesar’s Entertainment Corp., while MGM Resorts International has aligned itself with Boyd Gaming Corp. and Bwin.party, parent company of Party Poker, in partnership deals.