James Mitchell leads a British 1-2-3 in the EPT London Main Event, after a fantastic run late in the day which sees him with 3 times the average chip stack. 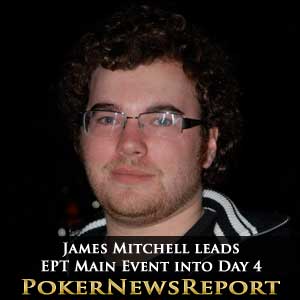 James Mitchell leads a British 1-2-3 in the EPT London Main Event, after a fantastic run late in the day which sees him with three times the average chip stack and a lead of more than 40 Big Blinds over his nearest rivals – Sam Macdonald and Martins Adeniya.

James, who won the Paddy Power sponsored Irish Poker Open in 2010, heads the remaining 62 players into Day 4 of 6 of the PokerStars sponsored tournament in pursuit of a first prize of £750,000.

James Mitchell had started the day in a good position, eleventh in chips behind overnight chip leader Benny Spindler (who finished the day in twelfth). In a major pot prior to the close of Level 16, Mitchell called a major punt by Christopher McClung on a board of 9♠ 8♦ 4♥ / 9♣ / 8♥ – risking his entire stack with A♦ Q♣. Fortunately for James, McClung only had a pair of sixes and James took the pot. An hour later, James made the right call again when getting in large with 9♥ 9♦ against Nikolas Liakos´ pocket Kings. The flop of 10♠ 9♠ 4♥ gave James a set of Nines, a stack in excess of a million chips and the overall lead going into Day 4.

The Bubble Bursts Quickly on a Short Day 3

Due to the stack of eliminations of Sunday evening, only 159 players started Day 3 including nine previous EPT Main Event winners. That was quickly chopped to seven as James Akenhead bust out in the first hand of the day, followed quickly by Jake Cody in the second hand of the day, and we lost Jason Mercier, Nicolas Chouity and Anton Wigg before the bubble burst on 104 players. EPT Barcelona winner Sebastian Ruthenberg busted out just before the close of play (76th – £9,000), but Joao Barbosa, Roberto Romanello and Salvatore Bonavena all battle on.

Other Notable Eliminations from the Main Event

The £20,000 Hi-Roller event starts at EPT London today, and those who are no longer in the Main Event who might just want to re-invest their cashes include Jamie Burland, Keith Hawkins and Andrew Feldman, who could in theory be facing Doyle Brunson, Tony Cascarino and the fabulously named Bolivar Palacios – who was an online qualifier for the Main Event and travelled all the way from Uruguay to participate. Sadly, Daniel Negreanu will not be joining the other hi-rollers. Negreanu had a hissy fit on Twitter when he found out that he could not late register four levels into the event with the full starting stack and he is going to spend the day in his hotel room sulking playing on PokerStars.

As well as James Mitchell, Sam Macdonald and Martins Adeniya, the UK is ably represented by Ben Jenkins, Neil Pearce and Jamie Rosen (among others), while the European challenge will be headed by Dutch [geolink href=”https://www.pokernewsreport.com/pokerstars”]PokerStars qualifier[/geolink] Matthijs Remie, Spanish PokerStars pro Juan Manuel Pastor and “Isildur1”´s big brother Sebastian Blom (who is actually the Swedish online poker champion). The Americas and Rest of the World still have plenty of players remaining in the tournament (23 nationalities are represented in the 62 players that will take their seats on Tuesday). The leading chip counts look like this:-