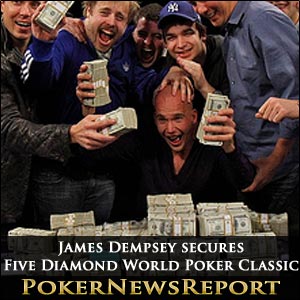 British pro James Dempsey completed an incredible journey to Las Vegas to leave the Nevada city with a lot more than he bargained for after winning the 413-player World Poker Tour (WPT) Doyle Brunson Five Diamond World Poker Classic at The Bellagio.

Dempsey was only in Sin City as a favour to close friend and fellow Brighton native Chris Moorman, who had asked him to collect some cash for him – only for the one-time World Series of Poker (WSOP) bracelet winner to leave with the top prize of $821,612 from the $10,000 buy-in event, as well as bracelet and a $25,000 seat for next May’s WPT World Championship.

As we have come to expect from such a glamorous event, the six-handed final table was packed full of star names, such as two-time WPT champ and last year’s winner Antonio ‘The Magician’ Esfandiari, online sensation Andrew Lichtenberger, 2010 November Niner Soi Nguyen, one-time WSOP winner Vanessa Selbst, Vitor Coelho – who picked up fourth place at the WPT Jacksonville Fall Series for $70,000 – and Dempsey himself.

With Selbst eliminated in third place for $338,351 by Dempsey in what was a fast-paced final table, he and California-based Vietnamese star Nguyen – who were almost even in chips – then got it on for a heads-up clash that slowed the pace down somewhat.

In fact, it took just 41 hands on Day 6 of the event to reach our final two, but then another 85 were required to separate Dempsey and Nguyen as they both became more conservative in their play.

However, Nguyen did move into a healthy lead following a few massive hands, only for Dempsey to battle back with two double-ups of his own that gave him a strong advantage.

With Nguyen now severely limited in his options, he had to secure a double-up of his own to stay in contention for the top prize – and it didn’t take long for all his chips to hit the felt.

Nguyen, with K♣ J♦, moved all-in over Dempsey’s raise, only for his opponent to call while holding K♥ Q♣.

The Englishman was way out in front, but Nguyen found top pair when the flop revealed J♣ 9♥ 6♣. His jacks stayed ahead when the 4♥ came on the turn, but the 10♦ river handed Dempsey a straight and a WPT title from his first entry into such a tournament.

Earlier in the evening, Esfandiari’s dreams of retaining the title – and joining Carlos Mortensen and Gus Hansen on a record three WPT titles during its 10 years – were shattered just 10 hands into the session by Dempsey.

On the button, Dempsey’s raise put big blind Esfandiari all-in when he called with A♥ 10♠. Esfandiari was ahead, though, as the Brit’s hole cards were A♦ 4♥, but Dempsey picked a four on the turn to send the one-time WSOP bracelet winner out in sixth spot for $119,418.

Coelho – whose biggest cash of $107,100 came at a WPT preliminary event in Borgota back in 2009 – was joining The Magician at the rail two hands later when he pushed all his chips into the middle with pocket eights, only to be beaten out by the overcards of Selbst and Nguyen.

The Florida pro picked up $159,224 for his fifth place finish, but more importantly he moved into second spot – only behind Will Failla – on the WPT Player of the Year leaderboard.

The final-table action did not, however, slow down one bit as Selbst doubled-up in a hand with last year’s eighth place finisher, Lichtenberger, who eventually exited in fourth for $218,933 when he shoved all-in with pocket eights and was called by Nguyen, who held nines.

Nguyen became the chip leader with that pot win as play became three-handed, although Dempsey moved level with him six hands later with yet another huge call.

Brooklyn’s Selbst, with K♣ 9♠, shoved all-in and Dempsey called to dominate with A♥ 9♣. Selbst was drawing dead by the time the A♣ joined the 6♦ 5♥ 4♥ flop, and the 5♣ river meant nothing as she exited in third.

The 27-year-old – the last pro to retain a major live event with her main event success at April’s PokerStars North American Poker Tour Mohegan Sun – moved slightly closer to Kathy Liebert for the number one spot on the women’s earnings list with her third place to sit approximately $1 million behind the Nashville pro.

Selbst’s exit left Nguyen and Dempsey to fight it out, with the English star emerging victorious following a momentous heads-up clash that swung back and forth.

Earlier in the event, Dallas native David Williams – the 2004 WSOP main event champion – exited in 10th place for $47,767 after losing out to Team PokerStars Pro Selbst during level 22.

Next to hit the rail was Las Vegas-based Anthony Yeh on the 71st hand of Day 5 during level 24.

Yeh, under the gun, open shoved all-in for his remaining 640,000-plus chips and Texan Larry Wells, in middle position, called. Yeh showed A♠ 10♠, but was dominated by Wells’ A♣ Q♦.

The flop of K♣ 9♥ 6♥ changed nothing, but Wells paired up when the Q♠ came on the turn, although that actually also handed Yeh an additional out because a jack would have given him a straight.

Just six hands later and eighth place went to Canadian Braden Hall, who lost out to James Dempsey to leave the casino with $63,690.

On the button, Dempsey raised to 80,000 and small blind Hall – who took his time to consider his options – eventually moved all-in for 450,000 while also pulling his shirt over his head!

Dempsey was obviously enjoying the fun, so then pulled his shirt across his mouth, while big blind Coelho thought long and hard before folding.

With the action now on Dempsey, he again thought for a short while before getting an exact chip count from the dealer to call with J♣ 9♣.

Calgary’s Hall showed K♠ 10♦ to be ahead, but, while the Q♦ Q♥ 8♥ flop keeps him in front, Dempsey also had a gutshot straight draw.

However, the 2s turn was no good to Dempsey, but the 10♣ on the river completed his straight and sent Hall away disappointed.

The railbirds had to wait for almost 50 more hands before the next elimination arrived – and it was Wells, during level 26, who exited in seventh place for $91,554.

Under the gun, Nguyen raised to 120,000 and was called by the middle positioned Wells.

But Wells, with A♦ J♠, called for trip aces, but was left shocked when Nguyen showed 8♦ 9♦ for a nine-high straight to leave us with our final six.