The WPT Champions Club welcomed another member at the weekend when James Carroll made a sensational call to claim victory in the Bay 101 Shooting Stars Event. 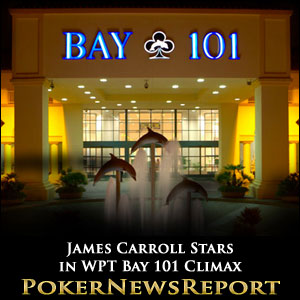 The WPT Champions Club welcomed another member at the weekend when James Carroll made a sensational call to claim victory in the Bay 101 Shooting Stars Event.

The WPT Bay 101 Shooting Stars tournament is a very popular stop on the WPT tour due to pre-determined “Shooting Stars” being assigned bounties of $2,500, a commemorative medallion and an autographed t-shirt. This year´s event attracted 716 players including WSOP Main Event Champion Ryan Riess, Daniel Negreanu, Vanessa Selbst and Phil Hellmuth.

However, after three days of action, none of the “Stars” remained, and just six players were left in pursuit of the $1,256,550 first prize. James Carroll – who is better known online as “croll103” – entered the final day in fourth place of the six remaining players, and facing a seemingly uphill challenge against chip leader Mukul Pahuja (who had position on Carroll), the tenacious Dylan Wilkerson (who took second place in the recent WPT Fallsview Poker Classic) and the only previous WPT Champion in the field – Nam Le.

With blinds starting at 30,000/60,000 (ante 10,000) when play got underway, the first few orbits of the button were fairly subdued. Nam Le and Garrett Greer won a few small pots to relieve the pressure of being short-stacked, and the most significant hand of the opening level was when Dylan Wilkerson rivered a Full House to take a stack of James Carroll´s chips (750,000) and move up into first place.

Garrett Greer had improved his stack up to 1.5 million with an uncalled shove, but he was soon on his way to the rail after shoving once again with 8♣ 8♥ and getting a call from Wilkerson who had the dominating 9♣ 9♥. Wilkerson´s pair improved a set on the Turn, and Garrett Greer was eliminated in sixth place.

Carroll Busts Le – Then Grinds into the Lead

As the blinds rose to 40,000/80,000 (ante 10,000), Nam Le´s short stack began to suffer. His pile of chips dwindled down to 565,000 chips before he decided to shove from the cut-off with A♠ {3♦ç and failed to improve past James Carroll´s 5♣ 5♥ to be eliminated in fifth place. Victory in the hand was a timely boost for Carroll, who himself had been sliding into the danger zone and who would have had fewer than 20 big blinds going into the next level.

Getting back into contention was a big deal for James Carroll at this stage as, though the next 100 hands, the four remaining players traded chips and each of them at one point held the chip lead. By the beginning of Level 33 (blinds 100K/200K – ante 25K) James Carroll had moved ahead, courtesy of a 2.9 million chip pot against Mukul Pahuja, when his A♥ 7♦ paired the Seven on the Turn and that was good enough to beat Pahuja´s mucked hand.

Following the return from a break at the beginning of Level 33, the game came alive. After four hours of fairly tepid action, Dylan Wilkerson rivered the 7♠ to double-up against Mukul Pahuja A♥ 7♣ > A♣ K♣, Pahuja got back into the game when he flopped two pairs to double-up against Shaun Suller Q♠ 8♥ > A♥ 2♥, but then got all-in with A♥ Q♦ against Dylan Wilkerson´s Q♣ 10♣ and watched in horror as the flop delivered A♠ K♦ J♠ to give Wilkerson an Ace-high straight and send him to the rail in fourth place.

Shaun Suller´s elimination in third place was equally unfortunate. On a board of K♣ 4♦ 2♠ / J♣ / Q♠, Suller checked to James Carroll, who bet 1,375,000 chips. Suller moved all-in with Q♦ J♠ for two pairs and Carroll made the call – turning over A♥ 10♠ for a runner-runner gutshot Ace-high straight. Victory in the hand gave James Carroll a 12.45 million -v- 9.1 million chip advantage going into the heads-up against Dylan Wilkerson.

Wilkerson Battles Back before Carroll Takes Down Bay 101 Shooting Star

With blinds now up to 125K/250K, the lead flip-flopped several times during the heads-up. Dylan Wilkerson took an early advantage when forcing James Carroll out of a 2.7 million chip pot, but James Carroll evened the chip counts up when returning the favour in a pot worth 5.5 million chips. Wilkerson nudged ahead again, but continual pressure from Carroll reduced Wilkerson´s chip stack to 6.3 million chips without a hand going to showdown.

Eventually the pressure got to Wilkerson and, on a board of 9♣ 4♥ 2♠ / 2♣, he moved all-in with A♥ 5♣ for Ace-high with the chance of a gutshot straight. James Carroll thought about his decision for a while and then made the call with 6♠ 4♦ for a pair of Fours. It turned out to be a fantastic decision as the Q♥ landed on the River, eliminating Dylan Wilkerson in second place and giving James Carroll the title of WPT Champion.