James Calderaro took down the WPT Lucky Hearts Poker Open after an engrossing six-man final table at which many of the pivotal hands were won against the odds. 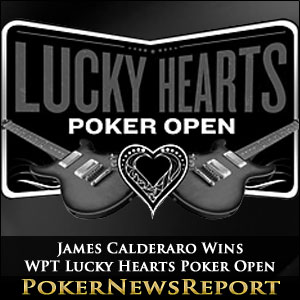 James Calderaro took down the WPT Lucky Hearts Poker Open after an engrossing six-man final table at which many of the pivotal hands were won against the odds.

The Valentine-themed WPT Lucky Hearts Poker Open was concluded yesterday at the Seminole Coconut Creek Casino in Florida after four hard days of poker. However, unlike the three previous days in which a high level of skill had been on display, most of the important hands were decided by luck – with James Calderaro enjoying the biggest slice.

Calderaro had come to the final table third in chips, but faced robust opposition from experienced professionals Shannon Shorr and Keven Stammen. He also had to contend with the unpredictable chip leader – Dimas Martinez – having position on him.

The final table of the WPT Lucky Hearts Poker Open was remarkable for the way in which getting in with the best pre-flop hand often signalled a player´s imminent departure from the event, and it only took one orbit of the button for the suck-outs to commence.

In the sixth hand of the day, James Calderaro opened the betting with a raise of 56,000 chips from middle position; Dimas Martinez re-raised from the cutoff to 156,000 chips, and Evan Dollinger moved all in from the big blind for 592,000 chips. Calderaro folded, Martinez called and the cards were on their backs:

Dollinger was an 80% favourite to double up prior to the flop of J♠ 7♦ 5♠, which made Martinez a set of Sevens. There was no help for Dollinger on the Turn or River, and he was sent to the rail in sixth place for $54,355.

Kegel Flushed out by Ducks

Tim Kegel had achieved his seat at the final table by knocking out two players in one hand and then keeping out of the way when the chips were flying at the end of Day 3. However, as the blinds rose to 15,000/30,000 (ante 5,000) during Level 25, Kegel´s stack had deteriorated to 410,000 chips and “keeping out of the way” was no longer the best policy.

Kegel moved all-in with A♣ K♣ and received a call from Shannon Shorr, who rolled over 2♥ 2♠. Kegel connected with the flop of K♥ J♥ 8♦, as was an 87% favourite to double-up against Shorr, until the Turn (9♥) and River (7♥) both delivered Hearts, to give Shorr a runner-runner flush and eliminate Tim Kegel in fifth place for $67,842.

The demise and eventual departure of Dimas Martinez was ironically the most conventional of the five eliminations that occurred on the final day of the WPT Lucky Hearts Poker Open. Martinez had played pretty loose throughout the tournament and enjoyed more than his fair share of winning hands against the odds.

However, luck was not going his way at the final table and, after losing a significant portion of his stack to James Calderaro when Calderaro had made Quad Nines out of 9♠ 5♠, he attempted – and failed – to bluff Shannon Shorr out of a 1.5 million chip pot.

Martinez´ elimination came at the hands of James Calderaro after he moved all-in from the Big Blind for 1.6 million chips with A♦ K♣ and Calderaro made the call with 10♦ 10♠. Martinez had a sweat for a flush after the flop and Turn of Q♥ 5♦ 4♣ / 9♣, but the Q♦ on the River was a brick, and Martinez was eliminated in fourth place for $90,366.

Stammen Gets Done on the River

Stammen´s elimination was another “against-the-odds” hand, in which he had moved all-in with A♦ K♦ and received a call from James Calderaro (A♣ 9♠). Stammen was well ahead in the hand after the flop of Q♦ 2♥ 2♠ and Turn of 3♣ (an 80% favourite at this point), but the 9♦ spiked on the River to pair Calderaro´s hand and bust Stammen from the event in third place for $122,197.

Going into the heads-up, Shannon Shorr (6,560,000 chips) had a thirteen big blind advantage over James Calderaro (5,905,000 chips), and the two players traded the chip lead over the next three levels without either developing a commanding advantage.

In the next hand the two players were all-in again – this time Shorr (A♦ J♥) being the strong favourite both pre-flop and after the first three community cards were dealt 5♣ 5♠ 3♦. Shorr was still a 2/1-on favourite to double up again after the K♦ on the Turn, but the 6♦ fell on the River to give James Calderaro (9♦ 8♦) a winning flush and victory in the WPT Lucky Hearts Poker Open.