London poker star James ‘Asprin1’ Akenhead has been notable by his absence when it comes down to the big money at recent live events. 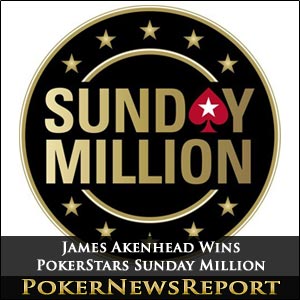 London poker star James ‘Asprin1’ Akenhead has been notable by his absence when it comes down to the big money at recent live events.

The 28-year-old has numerous final table appearances from World Series of Poker (WSOP) – including ninth place in the 2009 main event for $1,263,602 – and WSOP Europe events, but hasn’t been seen challenging for title lately.

However, the member of London-based poker group The Hitsquad blasted back into the big time – although not in a live event – by taking down the $215 buy-in PokerStars Sunday Million for a top prize of $213,750.

Akenhead – who also left Las Vegas with $520,219 added to his bank balance for finishing as runner-up to American Grant Hinkle in the 2008 WSOP event #2, a $1,500 buy-in No-Limit Hold’em tournament – outlasted 7,124 other players to record his largest online cash ever.

The Englishman, who burst on to the poker scene back in 2005, showed great skill and determination to secure this latest victory, although he also got very lucky during one hand at the final table.

Pnp23 called with his pocket queens, however, but was left deflated when a flop of K-10-7 arrived to hand Akenhead a massive double-up.

The English star seemed to be inspired by his good fortune as he ultimately made it to a heads-up battle with Pnp23.

The chip stacks were pretty close at this point, before Akenhead shoved all-in while holding K-J – only to be met by the pocket eights of Pnp23.

Akenhead must have been concerned when a flop of 7-6-5 handed Pnp23 an open-ended straight draw to boost his over pair.

However, Akenhead found a club on the turn to give him the chance of a flush. The river produced a king, though, as the Englishman still secured the crown to take his career earnings beyond the $3 million mark.

Of course, this event is open to anyone with the cash to buy in, so get yourself over to PokerStars if you fancy the chance of emulating Akenhead this weekend.