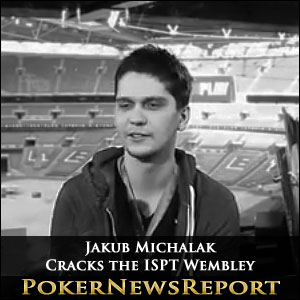 Jakub Michalak demolished the ISPT Wembley Main Event yesterday after starting the day fifth in chips and having his Aces cracked by Nick Hicks in one of the first hands of the day. However, Michalak recovered to eliminate four of his five final table opponents and win the event.

Unfortunately for the winner, a deal had been agreed before the start of play to split the €1 million prize money between the six remaining players and leave €200,000 to play for (as was predicted on PokerNewsReport yesterday) and, because of his lowly starting position, Michalak ‘only’ took home €436,000 for his victory.

Michalak Cracked and Cracks Back

It would have been a brave man who predicted a win for Jakub Michalak after Nick Hicks (K♠ J♦) flopped trip Jacks in one of the first hands of the day to crack Michalak´s A♦ A♠, But Michalak bounced back, and took down a 12 million chip pot with a rivered Broadway Straight to crush Pete Linton´s K♦ K♠ and then took the chip lead in the event before the end of the first full level of the day when his A♥ Q♥ flopped top pair against Linton’s K♠ 4♠.

From then on there was no looking back for the Pole. Jakub Michalak eliminated Gwendolin Janot in sixth (A♦ 2♥ > 10♦ 7♥), took another 2 million chips from Pete Linton A♦ 2♠ > K♠ Q♥ and then gained his revenge on Nick Hicks (A♦ 6♣ > A♥ 5♣}) when four diamonds were dealt on the board. Pete Linton was not giving up however, and moved to within 3 million chips of Michalak when eliminating Alban Juen in fifth K♠ Q♠ > J♦ J♠.

With two-thirds of the chips in play between them, the irresistible force of Pete Linton (A♦ Q♣) called the all-in pre-flop bet of Jakub Michalak (K♦ J♣) – the immovable object. Whoever came out of this hand with the chips would have a commanding advantage over the other remaining players and would effectively end the tournament as a contest.

Initially it did not look good for Michalak, but the flop of K♥ 8♠ 9♣ put him ahead in the hand. The J♠ on the Turn improved Michalak´s hand to two pairs, but Linton could stay alive in the tournament – and have most of the chips in play – if a Ten spiked on the River. Fortunately for Michalak, the River card was the 5♠ and Pete Linton was bust from the ISPT Wembley in fourth.

Jakub Michalak was well behind in the two hands which eliminated Nick Hicks and Xavier el Fassy to win the ISPT Wembley. Hicks (A♥ 4♥) was a 67% pre-flop favourite to win the hand when calling Michalak´s pre-flop raise with K♠ 2♦, but the flop of A♣ 2♥ 2♠ put the odds firmly in favour of the Pole and Hicks was eliminated in third.

Xavier el Fassy was an even stronger favourite to win the last hand of the tournament – his K♦ K♣ being a 71% favourite over Michalak´s A♣ 7♠, but the A♥ on the flop and A♣ on the river sealed the Frenchman´s fate and Jakub Michalak had won the first ever (last ever?) International Stadiums Poker Tour Main Event.

Jakub Michalak collected €436,000 for his victory in the International Stadiums Poker Tour Main Event, but it has to be wondered would the result have been any different had no deal been made before the start of the final day and the game been played differently.

Would Michalak made the same decisions when he had the smallest stack had he not already have locked up €236,000? Would Pete Linton have called Jakub Michalak´s shove if there was still €850,000 between first prize and fourth? These things we may never know until the next International Stadiums Poker Tour!