Jake Skidmore pulled off one of the most unlikely victories seen in a major poker tournament when winning the GukPT Goliath at the Ricoh Stadium in Coventry. 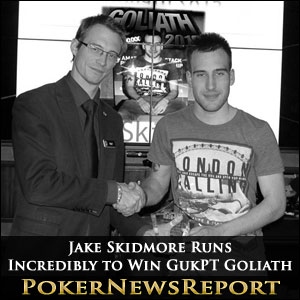 Jake Skidmore pulled off one of the most unlikely victories seen in a major poker tournament when winning the GukPT Goliath at the Ricoh Stadium in Coventry.

Yesterday the climax of the £120.00 buy-in GukPT Goliath was played out at the G Casino in Coventry – and what a climax it was! While most eyes were justifiably on the battle between the two chip leaders, seven other players also played their part in making this one of the most watchable and exciting final tables of the year.

Eventual winner – Jake Skidmore – had been down to his last big blind during Sunday´s action, but had recovered to take his place at the final table – albeit as one of the short stacks. A stunning bluff which paid off, a successful hero call under pressure and an incredible run of cards when it mattered, enabled Skidmore to get into the heads-up – where a fortunate River card enabled him to win the Goliath and the £56,540 first prize.

Coming into the final table, overnight chip leader Jiri Sladkovsky held a commanding chip advantage over Daniel Cullen courtesy of some sensation pots on Day 3 of the GukPT, but Cullen himself had been there or thereabouts since Day 1, and was going to be one of the major players throughout an intriguing day of poker.

When the nine players who were going to contribute to the final table action took their seats, they were just a few hands into Level 32 (blinds 100,000/200,000 – ante 20,000) and the respective chip counts looked like this:-

Hand #1 Cullen Back in Front

It did not take very long for the first elimination from the final table – just one hand. But whereas we might have expected one of the short-stacks to try their luck against the chip leaders, it was Daniel Arbon (A♦ K♦) who shoved his massive chip stack into the middle on the flop of Q♠ 6♦ J♦ and was called by Daniel Cullen who was holding Q♣ Q♦. With no further Diamonds to rescue Arbon, he was bust from the tournament in ninth, and Daniel Cullen was in the chip lead with 22 million chips.

Normal service was resumed in the very next hand, when short-stack Kevin Stevens (A♣ K♦) got all his chips in pre-flop and was called by Rob Trueman (10♣ 10♥). Trueman´s Tens held, and the final table of the GukPT Goliath was already down to seven players. It was then that one of the most significant hands of the final table was played…..

Jake Skidmore (5♥ 9♥) opened the betting and was met by a raise from Daniel Cullen (8♣ 8♠). Skidmore responded by shoving the rest of his chips into the middle and – alarmingly for Skidmore – Cullen made the call. Cullen was well ahead when the cards were turned on their backs, but a flop of 5♦ 5♣ 7♠ incredibly gave Skidmore trips which held to keep Jake Skidmore´s Goliath dreams alive and take a little of the shine off Daniel Cullen´s chip stack.

Throughout Level 33 Trueman and Skidmore continued to chip up against their better stacked opponents – leaving Luke Vinnicombe as the player most in danger. But it was Rob Trueman who was next to depart at the beginning of Level 34 (blinds 150,000/300,000 – ante 30,000) when he attempted an outrageous pre-flop bluff with 4♦ 9♥ and, after much deliberation, Jiri Sladkovsky (A♦ 10♣) made the call. The flop of Q♦ A♣ 5♦ effectively sealed Trueman´s fate, and with no miracle to save him, he was out of the GukPT Goliath in seventh.

Almost instantly, Nishid Pnadipleuman tried exactly the same ambitious move – getting all his chips in pre-flop from the small blind with K♣ 4♦ and running straight into Steven Winstanley´s A♠ K♠. Although Pnadipleuman still had the chance of a friendly Four on a board of 8♣ 6♥ 6♣ / 9♠, the A♣ was dealt on the River to send Nishid Pnadipleuman to the rail in sixth, and leave the five remaining players with these chip stacks:-

Vinnicombe – Vinnigone and a Stupendous Call by Skidmore

Luke Vinnicombe had done amazingly well to survive this far with the big guns blazing against his small stack, but his ill-timed shove with J♦ 5♠ was called by Daniel Cullen (J♣ Q♠) and with both players missing the board Vinnicombe was gone in fifth. Cullen could have gone into an unassailable lead in the next hand, but his bluff with 2♣ 8♠ was picked off by Jake Skidmore (J♠ 9♣) after Cullen had made a 1.66 million raise on the A♥ river (Skidmore hitting just a pair of Nines on the Turn).

Some people fail to learn from history and, despite already seeing Daniel Arbon and Kevin Stevens eliminated with Ace-King combinations, Steven Winstanley announced he was all-in with A♣ K♥ in the first hand of Level 35 (blinds 200,000/400,000 – ante 40,000). Jiri Sladkovsky made the call with Q♣ Q♠ and, after the dealer had dealt a Seven-high board, Winstanley left the GukPT Goliath in fourth place.

If you are going to run good, you might as well do it when there is £56,540 first prize, and that is exactly what Jake Skidmore did – busting out Daniel Cullen in three amazing hands.

Having bust Daniel Cullen from the GukPT Goliath, Jake Skidmore took a huge chip advantage into the heads-up against Jiri Sladkovsky, and extended that advantage in the first hand when a pre-flop shove with A♥ 3♥ was enough to make Sladkovsky lay down his cards after making a 1 million chip raise.

The final hand typified Jake Skidmore´s good run. Although ahead with A♦ 10♥ when calling Sladkovsky´s shove with K♦ Q♦, the flop of Q♣ 2♥ J♦ put Sladkovsky firmly in the lead. The 3♣ on the Turn made no difference to either player´s hand, but the K♠ on the River gave Jake Skidmore a rivered straight – and the GukPT Goliath title.

Jake Skidmore´s victory in the GukPT Goliath was a fitting conclusion to a record-breaking event. The 2,570 players who qualified for the event, bought-in directly or re-entered during the four Day 1s set a record for the biggest live poker tournament ever to be played in Europe. The tournament was played in a fantastic atmosphere and was so busy at one stage that the GukPT´s commentator Phil “The Tower” Heald had to deal to a table of players.

At the end of an exhilarating event, Jake Skidmore will be remembered for taking down the £56,540 first prize, but a word should go out to the other 1,821 unique players, the staff and management of the G Casino in Coventry for staging such a wonderful event.