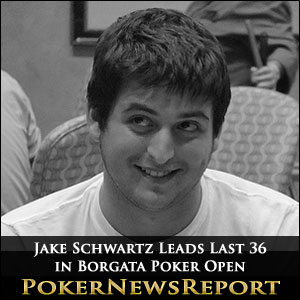 Unfortunately for many, the early levels of Day 2 were to be as far as they got. Anthony Zinno, Vinny Pahuja and Larry Wolf all bust out before the dinner break, while Paul Volpe followed soon after, along with five times Borgata Poker Open champion Will Failla. However, there was some consultation for Event #11 winner Anthony Caruso and Jordan Ludwick, who both jumped into the “Big Stack” Event #14 and made the final table.

Chip Leaders Flip-Flop throughout the Day

At the start of play (Level 11 blinds 500/1,000 – ante 100), Arthur Pro had a comfortable lead with 252,300 chips, and he quickly extended his advantage – being the first player through the 500,000 chip barrier by the first break of the day after his pocket Aces and a paired board had counterfeited his opponents flopped two pair.

However, Pro took some big hits on the way to the dinner break – including a rivered Full House over his flopped Broadway Straight – and by dinner he was down to just over his starting stack for the day, enabling Alex Rocha to move into the chip lead after he bust out Paul Volpe´s conqueror – Chris Klodnicki – K♣ K♠ > Q♥ J♥.

After the dinner break, it was the turn of T J Shulman to take over at the top. Shulman had bust out Will Failla earlier in the day (AA>AK), and then slow-rolled a flopped Broadway straight against an aggressive player to move up beyond 500,000 chips. He then cracked an opponent’s Aces with a flopped set of Kings to take the chip lead – which he held until shortly before the bubble.

Just before hand-for-hand play started, a new chip leader emerged in the shape of She Lok Wong. Wong (7♦ 6♦) and Chad Himmelspach (10♦ 9♦) had got all their chips in on a flop of Q♦ 5♦ 4♦ – with both players having flopped flushes. The K♥ on the Turn kept Himmelspach in front in the hand, but the 3♦ spiked on the river to give Wong a straight flush, and send him into the chip lead with more than 700,000 chips.

The next player to see his name at the top of the Borgata Fall Poker Open Championship leaderboard was Jeremy Menard. Menard had already bust Dan Wach in 65th place (two from the money) when he had cracked Wach´s pocket Aces with a flopped set of Queens; and, in the next hand, Melad Marji had moved all-in with pocket Fives and Menard made the call with Ace-King. Menard hit Aces on the flop and the River to send Marji to the rail in 64th place, elevate himself to the head of the chip counts and ensure that the remaining players in the tournament were guaranteed a minimum cash of $5,123.

Thereafter a race to the cashier´s desk ensued. Within the space of two levels, twenty-seven players bust from the Borgata Fall Poker Open Championship – including former chip leader Arthur Pro (KQ < AQ -v- Joe Neiman), Matt Stout (51st place) and Todd Terry (41st place). Play for the night was halted when the field was reduced to thirty-six players after Jake Schwartz had bust Frank Walker in the final hand of the night, and the remaining players will re-convene tomorrow at the Borgata Casino and Spa to play down to a winner.