Jake Schindler saw off thirteen star-studded opponents on the final day of the PCA High Roller to win the tournament and collect the first prize of $1,192,164. 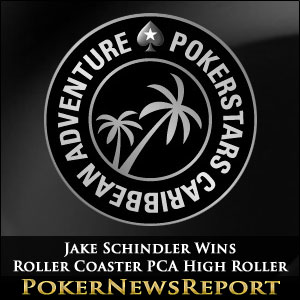 Jake Schindler saw off thirteen star-studded opponents on the final day of the PCA High Roller to win the tournament and collect the first prize of $1,192,164.

The climax of the $25,000 buy-in PokerStars Caribbean Adventure (PCA) High Roller was an engrossing event, as fourteen of the world´s most famous players returned to the Imperial Ballroom in the Atlantis Resort in pursuit of a seven-figure payday.

Leading the field overnight was the most successful female player in the world – Vanessa Selbst – with a WSOP Main Event champion (Greg Merson), the GPI Player of the Year (Ole Schemion), GPI Player of the Decade (Daniel Negreanu) and a WPT World Champion (Marvin Rettenmaier) also in the shake-up.

All of the above-mentioned players made it to the nine-handed final table, except for Daniel Negreanu; whose luck deserted him in the second hand of the day when he ran K♠ K♣ into Greg Merson’s A♥ A♣. Negreanu was bust in fourteenth for $89,560 – a net loss for Negreanu in excess of $¼ million in the ten days of the PokerStars Caribbean Adventure.

Just a few hands remained in Level 21 (blinds 10,000/20,000 – ante 3,000) when the nine remaining players took their seats at the final table; but there was still time for Greg Merson and Jake Schindler to exchange places on the leaderboard after Schindler´s A♦ K♣ out-kicked Merson´s K♥ J♥ on a King-high board, and Ole Schemion nabbed a valuable double-up against Marvin Rettenmaier (Q♣ 8♦ > A♠ A♣) after Schemion had cracked his compatriot´s Aces with a turned straight.

Having your Aces cracked can do things to a man, and Rettenmaier was soon to depart the final table of the PCA High Roller tournament when shoving the last of his chips in with 8♠ 8♦ and getting a call from Greg Merson (A♠ 10♦). The A♣ on the flop but Merson ahead in the hand, and with no Eight to save him on the Turn or River, Rettenmaier was sent to the rail in ninth place.

By the start of Level 23 (blinds now 15,000/30,000 – ante 5,000), Jake Schindler had moved to the top of the leaderboard courtesy of a hand against Mustapha Kanit in which his intended bluff with 10♥ 9♥ on a Four-high flop turned into a pair of Nines on the Turn which was good enough to take down a ½ million chip pot.

Kanit recovered when forcing Vanessa Selbst off a big pot and, for the remainder of the level, Schindler and Kanit seemed to be forcing Selbst out of hands for fun. Throughout Level 24, the chip lead flip-flopped between Schindler, Kanit and Greg Merson, while at the other end of the chip counts, Ole Schemion and Robert Mizrachi were finding double-ups to keep their hopes of victory alive.

Vieira Out, Mizrachi Up, Déjà Vu for Vanessa

The player who had suffered most in the spate of short-stacked double-ups was Joao Vieira, and he was the next player to depart from the final table of the PCA High Roller event after running his 9♦ 9♣ into Robert Mizrachi´s K♦ K♥. Almost immediately Robert Mizrachi shot into the chip lead in another Kings > Nines hand – this time against Ole Schemion.

However, Robert Mizrachi´s reign at the top of the leaderboard was not to last long; and, after Vanessa Selbst had flopped a set of Sevens – and taken three streets of value from Mizrachi – to regain control of the tournament at the close of level 25, it was pretty much a case of déjà vu; with Selbst leading from Schindler, Merson and Kanit, while Schemion and Denisov were the short stacks.

Ole Schemion had come into the final table of the PCA High Roller as the shortest-stacked player, but a series of double-ups had kept him alive in the tournament thus far. However he was crippled by Jake Schindler 9♣ 8♣ > K♠ J♦ when Schindler rivered a Ten-high straight against Schemion´s turned top pair, and the last of Ole Schemion´s chips soon went in with A♥ J♥, but he failed to improve past Mustapha Kanit´s A♦ K♥ and was bust in seventh place.

Aleksandr Denisov had been short for about two days before eventually losing the last of his chips, and he left the final table in sixth place after shoving all-in with 3♦ 3♥ and finding Robert Mizrachi holding 6♠ 6♥. A confrontation between Jake Schindler and Mustapha Kanit saw Schindler forced out of a ½ million chip pot just before the dinner break and, as the players vanished for cucumber sandwiches and a chocolate hobnob, Mustapha Kanit had a clear advantage at the top of the High Rollers leaderboard:

The post dinner action was played at a furious pace. With blinds now at 40,000/80,000, Robert Mizrachi lost a stack of chips to Vanessa Selbst, doubled-up against Greg Merson A♥ 5♦ > K♣ Q♠ and then moved all-in with K♠ J♥, but failed to connect with the board, and was eliminated in fifth by Vanessa Selbst (8♦ 8♥) – Selbst now into the chip lead with 5.2 million chips.

Mustapha Kanit´s demise was quick and primarily due to a big double-up by Jake Schindler, who rivered a flush to best Kanit´s turned straight (Q♦ 8♦ > K♠ 8♠). Kanit then doubled up Greg Merson (A♦ 5♣ > K♥ Q♥) before losing the rest of his chips to Vanessa Selbst A♥ A♣ > J♠ J♣. Another double-up by Greg Merson (A♠ 8♥) against Vanessa Selbst (3♥ 3♠) reduced Selbst to the position of short-stack during three-handed play, and she was eliminated in third when her A♦ 9♦ was out-kicked by Jake Schindler (A♣ 10♥) on an Ace-High board.

Schindler and Merson Chop the Pot – Schindler Rolls Onto Victory

After Vanessa Selbst´s departure, Jake Schindler and Greg Merson agreed a deal that would see the two players lock up $992,624 and $948,996 respectively, with $200,000 and the trophy to play for. It was a good deal for Merson, as Schindler had a 6.9 million -v- 4.93 million chip advantage and, when the two players sat down to contest the heads-up climax of the PCA High Rollers tournament, the chips initially went in only one direction – that of Jake Schindler.

A missed flush draw with K♦ 5♦ against Schindler´s A♠ A♣ reduced Greg Merson to 2.6 million chips, after which Merson shoved four times without Schindler getting tempted to make the call. Eventually the two players decided that they would go all-in blind on the next hand and the cards were on their backs.