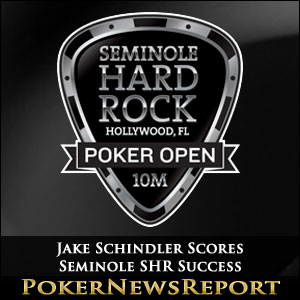 Due to several potential high rollers still being involved in the $10 million guaranteed Seminole Hard Rock “Championship” tournament, the Seminole SHR event attracted just nine players when the action got underway on Monday.

Play in the $100,000 buy-in tournament was stopped after just four levels of Day 1, when the field was reduced to just five players, as PokerStars.tv had an agreement to live stream the final table – and they needed some players left to film.

Consequently, the five remaining players returned to the Seminole Hard Rock Casino in Florida yesterday with the following chip stacks:

Overnight Controversy about the Prize Money

During the night a very public row developed over the payout structure for the event. The players had been told during Day 1 that – with an entry of just nine players – just the first two would get paid on a 65-35 split. That information was contradicted at the end of play when the tournament director provided the official payouts indicating that three players would get paid on a 50-30-20 split.

The news of this new payout structure upset chip leader Scott Seiver; who allegedly discussed the revisions with Seminole´s Head of Operations after all the other players had left the playing area. According to a post by Ryan Fee on the 2+2 forum:

Fee also went on Twitter to express his displeasure; claiming that it was outrageous that the structure should be changed from the official payouts just to suit the chip leader. Fee indicated that he would be making his opinions vocal during the live stream of the final table, but the controversy was finally resolved when the management of the Seminole Hard Rock Casino admitted that there had been a miscommunication and added $50,000 to the prize money to pay out a third place.

Mo So Unlucky – Busts in Fourth

Unbelievably, Jason Mo had the worst bad luck after the hand which eliminated Josh Arieh. Having already lost a big pot to Ryan Fee (10♥ 7♠ > J♥ 8♠}) when Mo´s Queen-high straight was bested by Fee´s Full House, Mo then ran J♦ J♠ into Ryan Fee´s A♥ A♦ to be reduced to 70,000 chips.

Mo managed to double up once against Fee (K♦ 9♦ > Q♥ 9♣) when his King was a better kicker on a nine-high board, but ran into Ryan Fee´s pocket Aces once again when shoving with A♠ Q♣ and was eliminated from the Seminole Super High Rollers event in fourth place.

Irrespective of who was right and who was wrong in the overnight controversy about the payout structure, there was a certain amount of irony about Scott Seiver´s departure in third place. Ryan Fee had doubled up into the chip lead against Seiver when his pocket Queens held against Seiver´s pocket Jacks, and Scott Seiver had been reduced to just eleven big blinds.

The last of his chips went in with A♣ Q♥ and Seiver received a call from Ryan Fee (A♥ 8♣). Seiver looked good for a double-up after the flop and turn of J♠ 6♠ 10♣ / A♦, but the 8♥ spiked on the River to give Fee two pairs, and bust Scott Seiver in third place.

Going into the heads-up of the Seminole Super High Rollers event, Ryan Fee had a 581,000 -v- 319,000 chip advantage against Jake Schindler, but the roles were reversed when Schindler doubled-up into the chip lead 10♠ J♦ > A♠ K♦ on a Ten-high board.

Play continued for a further two hours, with Schindler increasing his advantage through some aggressive play. Fee eventually moved all-in for his last chips and was snap-called by Schindler:

The flop of 4♣ 8♦ 9♦ could not have been better for Ryan Fee, who took the lead in the hand with two pairs; but the K♣ on the Turn gave Schindler a set of Kings. The A♠ on the River blanked for both players and Jake Schindler had won the Seminole Super High Rollers event for $570,375.