The highlight of this weekend´s Poker in the Park festival was the British Poker Awards 2011. With most of the categories voted on by the public, it gave an opportunity for poker players and those who promote poker in the UK to receive a genuine accolade – rather than the ones bestowed upon them by media companies and poker magazines. 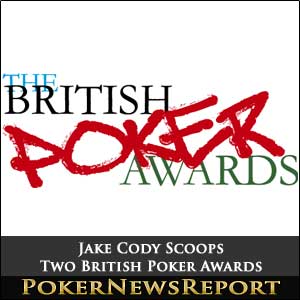 The highlight of this weekend´s Poker in the Park festival was the British Poker Awards 2011.

With most of the categories voted on by the public, it gave an opportunity for poker players and those who promote poker in the UK to receive a genuine accolade – rather than the ones bestowed upon them by media companies and poker magazines.

The event was hosted by comedienne Lucy Porter (Have I Got News for You, Mock the Week and Argumenta) and, as well as much plaque-collecting, included a charity auction to raise money for Peace and Sport. Sadly, many of the winners had commitments elsewhere, but John Duthie was able to collect his award for Outstanding Contribution to Poker and the event was graced by Party Poker´s Kara Scott who won the award for Poker Personality of the Year.

The full list of the British Poker Awards winners were:-

Jason Mercier has had an astonishing last few months. Having captured the High Roller NAPT Bounty Shootout in April, he went on to become EPT Series 7 “Champion of Champions” In Madrid, followed that up with three final table appearances at the World Series of Poker (Including a bracelet for the 6 Max pot Limit Omaha) and then finished third in the inaugural Epic Poker League Main Event.

The first of Jake Cody´s two awards was given in recognition of his Minnie Mouse T-shirts fantastic Triple Crown achievement and in such a short space of time. Jake only won the first leg last year in the EPT Main Event in Deauville, and was on for the Triple Crown after winning London´s WPT Main Event in August. It was the manner of his incredible victory in the WSOP Heads-Up High Rollers tournament that sealed his success and the imagination of the British public who voted for him.

Sam Trickett might be a blooming awful whinger about his “lack” of success in tournament play (even though he picked up $2.9 million in Australia over the winter), but his cash game success is legendary. Allegedly taking over $1 million from Tom Dwan and a Chinese tycoon in Macau on his way back from Oz, Sam is one of the most feared cash game players in the UK.

This award represented a nice acknowledgement from the British poker public for JP Kelly who, since his sponsorship by PokerStars, does not seem to feature in so many Omaha games. Maybe, with the World Championships of Online Poker (WCOOP) just starting, he will demonstrate once again his prowess in the nine-card game.

Being able to master the disciplines of the mixed poker game requires a very special understanding of the games as individuals and as a whole. Richard Ashby has demonstrated that skill at the very highest levels, winning the bracelet at the 2010 WSOP for 7 Card Stud and finishing second in the H.O.R.S.E. Championship in the same year. His success continued in the Aussie Millions 8 Game Tournament (1st), 2011 WSOP Omaha Hi/Lo Championship (4th) and 2-7 Lowball Championship (3rd).

This award was very much anticipated (even we got it right in our preview!) as Chris has accumulated more than $7.3 million in online tournament play in recent years. His transition to the live game this year has also been rewarding for Chris, who cashed in five events at the World Series of Poker.

There is no doubt that 2plus2 is the most active poker forum on the Internet and, with such a large database of members to canvass to, was easily able to triumph over Blonde Poker, Pocket Fives and the Hendon Mob forums.

Neil Channing writes very intellectually and with a human touch. He is also universally liked and therefore no surprise that his fans voted en mass for him to collect this prestigious award.

Vicky Coren is always entertaining on Twitter, even when it is not about poker, and announced to anybody who had followed her on the back of her Best Social Media Award success “that is the level of entertainment you can expect” shortly before busting out of the PokerStars WCOOP Event Nº1.

All of the nominees in the Best Poker League category should have received a fifth of the award each for the sterling work they do at grass-roots level. But somebody had to win, and the members of the Champions Poker League did their utmost to ensure it was them that won the award this year.

Kara Scott is a great ambassador for Party Poker and has recently been featured as a “sideline reporter” for ESPN´s coverage of the WSOP Main Event. With that sort of profile, and her previous successes as a poker player and as a presenter on Poker After Dark, undeniably, she is the British Poker Awards “Poker Personality of the Year”.

When you think of an outstanding contribution to poker, John Duthie is probably the most fitting recipient of this award. In establishing the European Poker Tour, having it sponsored by PokerStars and making “big-time” tournament poker accessible to so many recreational players, John has a lot for the progress of British poker witnessed in recent years.

In an additional award, recognition was given to Matt Perrins as “Best Breakout Player” of the year. After years of being a solid player on the GUKPT and UKIPT tours, Matt “came good” in the WSOP 2-7 Lowball championship and returned from Las Vegas to narrowly miss out on the DTD “Monte Carlo” in July.

More than anybody in British poker, Roy Houghton deserves a lifetime achievement award. His first recorded involvement in the game was in 1966 (that´s right 66 – the year England won the World Cup!) and he has worked at London´s Gutshot Club and The Vic as well as being proprietor of the Lyndhurst and Loose Cannon Clubs. He was one of the first people to act as a Poker Tournament Director (the Vic – 1978) and also responsible for introducing the “Double Chance Freezeout” that has been popular in UK poker clubs since the 1990s.

PLAYER OF THE YEAR – Jake Cody

To wrap the awards up, a Player of the Year was chosen by an experienced panel of judges consisting of Bluff Europe Magazine editor-in-chief Michael Caselli, PokerNews.com´s Matthew Parvis and the “Voice of Poker”, Jesse May. As victory in live tournaments is far more tangible than winning stacks of cash anonymously online, the award went to Jake Cody – the judges confirming the belief of the British poker public who voted for Jake Cody as Best Tournament Player.