Cody has launched his own site that will provide a greater understanding of what it takes to be sponsored player as the poker landscape changes from day to day. 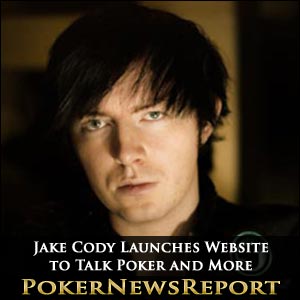 Rising poker star Jake Cody has launched his own website that will provide fans with a greater understanding of what it takes to be a sponsored player as the poker landscape changes from day to day.

The youngest winner of poker’s Triple Crown – with successes in the World Series of Poker (WSOP), World Poker Tour (WPT) and European Poker Tour (EPT) – is a member of the Pro  team of [geolink href=”https://www.pokernewsreport.com/pkr-poker”]PKR Poker[/geolink] and noted in his welcome post that he has decided to restart my blog, with a new home.

That new home is JakeCodyPoker.com – and 22-year-old Englishman Cody has promised to supply candid details on his tournament ventures as well as hand histories from events across the globe.

Having welcomed his many fans back to his re-established blog, Cody – who has earned more than $3 million from live tournaments – then goes on to write: I’m sure if you’re reading this you will know I’ve had a ridiculous few years with poker and achieved more than I thought was possible.

I like to think that I haven’t changed and that I’m still the same person I was back then. However my life has changed, I’m very lucky (but you already know that).

I have some great friends around me to keep me grounded and can’t thank them enough.

The Rochdale native became just the third player, when aged just 21, to secure the Triple Crown – following on from Gavin Griffin and Roland De Wolfe – while team PokerStars Pro Bertrand ‘ElkY’ Grospellier made it a four-member club later last year.

Cody, who only became a Team PKR Pro member last November, completed his Triple Crown back on June 4 last year when he pocketed $851,192 for taking down event #2, the $25,000 buy-in Heads-Up No-Limit Hold’em Championship, at the 42nd staging of the WSOP – adding that gold bracelet to the earlier titles he won on the WPT and EPT.

Certainly, 2010 was an incredible year for the youngster as he won his first EPT event in Deauville when picking up $1,213,194 – his biggest score – for securing the €5,000 buy-in No-Limit Hold’em main event crown at the Casino Barriere de Deauville on January 25, before adding $425,492 on September 4 for taking down the £5,000 buy-in No-Limit Hold’em main event at London’s Palm Beach Casino.

He will no doubt be hoping for more success at this summer’s WSOP – and all you fans of this likeable pro can stay informed of his progress, as well as read about his day-to-day life when in Vegas, with a PKR statement saying: Cody will reveal insights into his offline and online poker experiences, along with the lowdown on his adventures away from the tables.

The poker room’s statement continued by revealing details of his first blog entry from Monday, adding that he discusses the difficulties of following up on his success over the last two years and looks to the coming months for opportunities to provide blog fans with updates on his 2012 Irish Open exploits, fitness goals, his favourite poker bloggers and lots of pictures.

If all that isn’t enough for you, PKR also pointed out that, in addition to his new website, Cody is also an active Facebook and Twitter user, so it’s possible to find out even more on one of poker’s brightest young stars.

The Irish Open kicks off today for five days of play at Dublin’s Burlington Hotel – with a €3,200+€300 buy-in No-Limit Hold’em main event starting tomorrow – that draws to a conclusion on Monday evening.

Of course, Poker News report will keep you updated on how the main event goes, so bookmark us right now for an easy return.