English poker star Jake Cody made the most significant movement around the top 20 of the latest Global Poker Index (GPI) 300 rankings as the leading 10 remained unchanged. 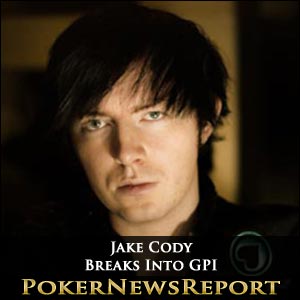 English poker star Jake Cody made the most significant movement around the top 20 of the latest Global Poker Index (GPI) 300 rankings as the leading 10 remained unchanged.

The Triple Crown winner from Rochdale climbed four spots in the rankings after two weeks outside the top 20 to claim that final spot – just 5.24 points ahead of American John Eames, who sits in 21st on 2141.67.

Team PKR Pro is a Star on the Rise

Cody continued his meteoric rise by becoming the youngest player to complete the Triple Crown when securing event #2, the $25,000 buy-in Heads-Up No-Limit Hold’em Championship, at last summer’s World Series of Poker (WSOP) for $851,192 on June 4.

That Riga score has now aged into Period 4 for Cody, but boosts his overall GPI total, resulting in him replacing Juha Helppi at 20th after the Finnish star fell 19 places to number 39 following the loss of 254.4 points.

Helppi has ‘enjoyed’ a rollercoaster past few weeks on the GPI, having climbed 18 places the week before to make the top 20 for the first time in three months.

The Helsinki star saw his points rise last week following his runner-up spot, which netted him $94,296, at the Euro Finals of Poker (EFOP) €10,000 buy-in No-Limit Hold’em High Roller event on January 29 in Paris.

However, two other scores aged into Period 2 on the latest rankings, so seeing Helppi’s total drop considerably.

The Finn made it to successive EPT final tables in August last year, taking fifth place in Tallinn’s €5,000 buy-in Pot-Limit Omaha Turbo tournament for $13,671, before following that up with sixth from the €2,000 buy-in No-Limit Hold’em event for $9,858 two days later.

But, while those events falling into Period 2 alone would not affect his overall total by that much, they have now joined four better scoring results to leave just two Period 1 scores for Helppi after he failed to add any replacement tournament placings recently.

The top 10 did not provide any thrills or spills this week, with no movement whatsoever to note. However, we had better record here what little there is to mention.

Therefore, it will come as no surprise to read that American Erik Seidel – an eight-time WSOP bracelet winner – held on to his number one spot on the GPI for a fourth successive week with 3,069.84 points.

The New York pro remained the same 83.77 points ahead of second-placed fellow American Jason Mercier as the previous week, with the Hollywood-based star staying put on 2,986.07.

The third spot on the rankings is still in the grasp of Frenchman Bertrand ‘ElkY’ Grospellier as the Triple Crown winner also neither gained nor lost points to sit at 2,839.23.

Incredibly, just New York State’s Failla managed to add any points to his overall total – and the 44-year-old could only put on 6.52 with one score ageing slightly!

Stephen O’Dwyer Takes Over in 17th

The 29-year-old – who also pocketed $128,063 for his runner-up spot in last December’s €3,000 buy-in No-Limit Hold’em main event at the World Poker Tour (WPT) stop in Venice – has shown good longevity on the rankings, having remained inside the top 50 since leaping up to a high of 15th back in early October last year.

However, while the leading places on the GPI provided little excitement following the earlier addition of points from last month’s Aussie Millions and PokerStars Caribbean Adventure (PCA), there was still plenty happening further down the rankings.

The next biggest leap came from Russian Mikhail Lakhitov, who climbed the rankings by 147 places to 67th on 1,671.55 points by adding 476.75 to his score with 32nd place in the Deauville main event to follow the Muscovite’s seventh in the €10,000 buy-in No-Limit Hold’em tournament that same week.

Lakhitov has been on a recent upward surge, having shot up 40 places on the previous week’s GPI from 254th.

However, Frankenberger needed those points gained from Atlantic City to creep back up the rankings after falling from a high of 77th back in late November.

Fifteen pros either made their debuts or rejoined the top 300 this week, with American Brock Parker – who had dropped out of the rankings in mid-December – another player to perform well at Borgata.

The Maryland player gained his points – to take him to 1262.56 and 193rd place – by finishing seventh at the Championship for $84,223 after two days earlier pocketing $76,387 for winning the $1,650 buy-in No-Limit Hold’em Bounty event. These set of results handed Parker his best ranking since early October.

Two other pros returning to the top 300 were Cincinnati’s Jacob Bazeley, who came in at 209th on 1,224.06 points, and Texan Ray Qartomy – who took the 254th spot on 1,135.18 – following good finishes in that same Championship tournament.

All three did well in Deauville, with Kerignard taking fourth place in the main event for $341,939, De Meulder scoring victory for $178,860 in the €1,500 buy-in No-Limit Hold’em tournament, and Lopes sneaking into the top 300 with a 73rd place exit in the main event following on from his success at the EFOP €5,000 buy-in No-Limit Hold’em Diamond Championship for $127,514 in Paris a few days earlier.

With 15 players coming in, that means 15 more had to make way as Tennessee’s David Daiz suffered the biggest fall from grace after last week holding the number 212 spot on the rankings.

Jason Wheeler Set to Bounce Back

However, with Wheeler taking seventh place and $33,683 at the WPT Venice main event – which was won by Russian Rinat Bogdanov – the Californian will almost certainly return to the GPI after just one week outside.

Rome’s Nicolo Calia (1,124.22 points) suffered the most spectacular drop of the week as he fell 73 places to 262nd – mainly due to his 43rd place in last year’s WPT Venice main event ageing in to Period 3 and the fact has no Period 1 scores.