Some of the biggest names in poker will be battling it out to be crowned the Player of the Year at the upcoming European Poker Awards to be held at the Aviation Club de France in Paris. 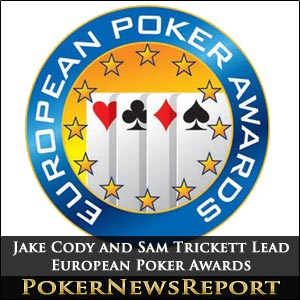 Some of the biggest names in poker will be battling it out to be crowned the Player of the Year at the upcoming European Poker Awards to be held at the Aviation Club de France in Paris.

The event – to be hosted by former European Poker Players Association (EPPA) secretary Nic Szeremeta – will take place on Wednesday, January 25, during the Euro Finals of Poker, with the winners selected by a group of poker industry experts, including awards honorary president Szeremeta, Finnish poker star Juha Helppi, host and poker player Kara Scott, and veteran poker media members such as Barry Carter and Jerome Schmidt.

But it wasn’t just the nominees for Player of the Year which were announced, as Rochdale’s Cody – a Team PKR Poker Pro – and Nottinghamshire’s Trickett also gained recognition in the Best Tournament Performance category, alongside Heinz, one-time WSOP bracelet winner Fabrice Soulier, of France, and German Benny Spindler, who won $1,172,241 after securing the main event title at the EPT/UK and Ireland Poker Tour (UKIPT) London back in October.

Another Englishman, Brighton’s Chris ‘Moorman1’ Moorman, is in line for the Internet Player of the Year, although he faces stiff competition for that award as the likes of Team PokerStars Pros Jude Ainsworth, of Ireland, and Viktor ‘Isildur1’ Blom, of Sweden, Frenchman Rui Cao and Finnish star Ilari ‘Ilari FIN’ Sahamies have also been nominated.

Additionally, Late Night Poker winner and WSOP November Niner Sam Holden, of Sussex – who collected $782,115 for his ninth-place finish in Las Vegas and is sponsored by 888 Poker – is joined by France’s Adrien Allain, Heinz, Ukrainian Oleksii Kovalchuk – who won the $2,500 buy-in No-Limit Hold’em six-handed event at last summer’s WSOP for $689,739 – and Pateychuk in the Rookie of the Year section.

Neil Channing and Jesse May Nominated

There is even an English tournament included on the Best European Event of the Year category, with the EPT London leading the way.

However, as with all these awards, nothing is certain as also nominated are International Poker Open Dublin, Partouche Poker Tour (PPT) Final, WPT Grand Prix de Paris, and the WSOPE Cannes.

Finally, the nominations for the Lifetime Achievement award will be announced at the ceremony.

Player of the Year

Rookie of the Year

Poker Staff Person of the Year

Internet Player of the Year

Rob Gardner Memorial Award for the Poker Personality of the Year

Best European Event of the Year