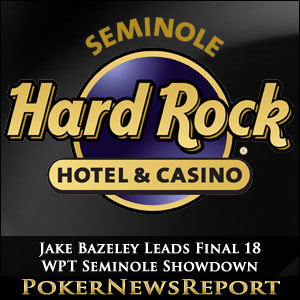 Jake Bazeley enjoyed a sensational Day 3 of the $5 million guaranteed WPT Seminole Hard Rock Poker Showdown in Florida, building his chip stack from less than 200,000 chips at the start of the day to 8,065,000 chips during seven levels of play – a lead of almost 1.2 million chips over his nearest rival Chance Kornuth; with third-placed Eric Afriat a further 1.5 million chips in arrears.

However, Bazeley will still have to produce his best game if he wants to get his hands on the $1,081,184 first prize, as behind him in the field are players such as Mukul Pahuja, Matt Stout and Matt Glantz, who between them have won more than $10 million in live poker tournaments.

Bazeley Starts How He Means to Go On

Jake Bazeley had the best possible start to Day 3 of the WPT Seminole Hard Rock Poker Showdown, doubling up in one of the first hands of the day Q♣ Q♠ > 7♥ 7♦ against David Forster, and then busting Bradley Ruben out in 98th place A♣ A♦ > Q♣ J♥ before the end of the opening level. A solid couple of levels before the dinner break saw Bazeley go through the 1 million chip barrier, and the elimination of Eugene Todd (Q♣ Q♠ > 5♣ 5♠}) after the dinner break took his stack to beyond 2 million chips.

As the field was condensed to just three tables, Jake Bazeley (8♦ 8♥) took a massive 3.4 million chip pot against Peter Striano (10♠ 10♣) with a flopped set of Eights, bust TV actress Sasha Barrese in twenty-second place (A♥ K♣ > K♠ 10♠ on a King-high board), and then finished the job against Peter Striano A♥ J♥ > A♦ 5♠ to eliminate the local player in twenty-first place.

Kornuth and Afriat Give Chase

Chance Kornuth also had an excellent start to the day, and took an early chip advantage over the rest of the field when busting out Grayson Nichols A♦ K♣ > 6♥ 6♠ within the first level before “Big Slick” was again the winning hand when he eliminated Tristan Wade (A♣ 10♣) in sixty-ninth place, and his domination of the event continued after the dinner break until he was leap-frogged by Bazeley. Kornuth didn´t give up however, and again scored an elimination with “Big Slick” when knocking out Michael Larocca in twenty-fourth place A♠ K♠ > A♣ Q♠.

Eric Afriat had a roller-coaster of a day compared to the two chip leaders. Having started the day with 710,000 chips, Eric Afriat had begun well enough – eliminating Scott Hart in ninety-first place A♦ A♠ > J♥ J♦ – but doubled up Sasha Barrese A♣ K♦ > 10♦ 9♦ to be reduced to just above his starting stack. A good spell of uncontested pots as the blinds rose enabled him to creep into contention once again, and he finished Day 3 of the WPT Seminole Hard Rock Poker Showdown by busting Ty Reiman in twentieth place A♠ K♦ > A♣ Q♠.

Looking Ahead to Day 4 of the WPT Seminole Showdown

When the eighteen players take their seats at the Hard Rock Casino in Hollywood, Florida, for Day 4 of the WPT Seminole Showdown, there will be just a few hands left to play in Level 27 (blinds 25,000/50,000 – ante 5,000). Play will continue until Wednesday´s final table of six is set, with the most likely candidates for one of those seats being: