Jaime Kaplan, the player who was given a seat at the last minute due to the “withdrawal” of Pro/Am qualifier Michael DiVita, leads after Day 1 of the Epic Poker League Main Event at the Palms Hotel & Casino in Las Vegas. 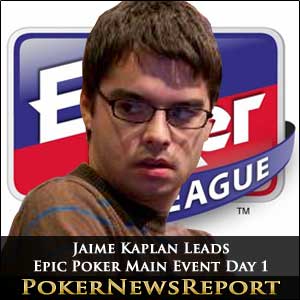 Jaime Kaplan, the player who was given a seat at the last minute due to the “withdrawal” of Pro/Am qualifier Michael DiVita, leads after Day 1 of the Epic Poker League Main Event at the Palms Hotel & Casino in Las Vegas.

In an astonishing day´s play, which saw second placed Dan O´Brien get the same pocket Aces (clubs and diamonds) dealt to him three times in three levels, Kaplan and O´Brien will hold a massive advantage over the rest of the field when the remaining 50 players take their seats for Day 2 tonight.

Pocket Aces are frequently a (poker) man´s best friend but, at the Epic Poker League Main Event today, it was most definitely a “Crazy Aces” day.

Things seemed normal enough in level 1 – Dan O´Brien´s A♣ A♦ holding up against Brandon Catu´s J♦ J♠ to eliminate the Canadian – but in level 2, Curt Kohlberg suffered a massive loss when his A♦ A♠ was rolled over by Chris Klodnicki´s A♣ K♥ – when Kings appeared on both the turn and river – and then, within just a few hands, Kohlberg was dealt A♦ A♥, only to see them cracked by Rep Porter´s flopped set of Queens.

The balance of power returned to normal when Matt Matros knocked out Gavin Smith with A♦ A♠ and Dan O´Brien twice more got paid off with A♣ A♦ to bust Russel Rosenblum and Brian Rast (the third time that Dan O´Brien has been dealt A♣ A♦ in three levels!). Rep Porter (who had previously eliminated Curt Kohlberg – above) found his own A♣ A♠ too good for Phil Laak´s Q♥ 10♦ and Andy Frankenberger guaranteed his seat in Day 2 when dominating Faraz Jaka´s Kings with A♣ A♦. However, “Crazy Aces” day still had one more twist.

A♣ A♦ was quickly becoming the “hand of the day” but, as David Williams discovered, it was not always a guarantee of success. Williams was dealt A♣ A♦ in one of the later hands of the day, and quickly got all-in against Chau Giang. Giang turned over A♥ A♠ and watched in delight as the board ran J♥ 6♠ 4♠ / 8♠ / 5♠ to give Giang a spade flush and send Williams to the rail.

As often happens in major tournaments, the chip leader emerges late in the day and this pattern occurred again last night. With the blinds at 500/1,000, Phil Hellmuth raised pre-flop and was called by Kaplin, Giang (who had just stacked up the chips from his spade flush) and Scott Clements.

With the flop showing Q♣ 10♦ 3♥, Hellmuth fired in another 4,500. Giang called and Kaplan raised to 14,000. Clements and Hellmuth got out of the way and Giang called again. After the 4♥ turn, Giang check-raised Kaplin all-in and turned over K♥ K♠.

Kaplin responded with 10♣ 10♥ and, with the Q♠ on the river, Kaplan’s trips won him a pot of 227,000 chips which catapulted him into the overnight lead.

Only the top twelve will cash in the EPL Main Event Nº 2, with the winner receiving $782,410. If Jaime Kaplan holds onto first place for the next three days, we might have an even more controversial winner than Chino Rheem in EPL Nº1!