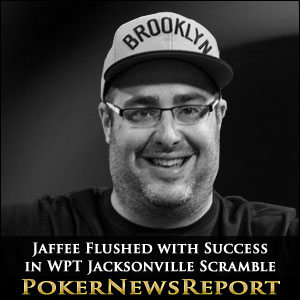 There was an incredible conclusion to the Main Event of the WPT BestBet Jacksonville Fall Poker Scramble as Jared Jaffee cracked the pocket Aces of his heads-up opponent to claim victory in the tournament, the WPT Champion´s trophy and $252,749 prize.

However, whereas Jared Jaffee had taken a substantial chip lead into the final day of the WPT Jacksonville Scramble, not everything had gone exactly to plan, and he had entered the heads-up second in chips behind eventual runner-up Blake Purvis.

Jaffee Starts as he Means to Go On

The final table of the WPT Jacksonville Scramble got underway a few hands into Level 26 (blinds 20,000/40,000 – ante 5,000), with much of the interest concerning whether Margo Costa would become the first lady to win an open WPT Main Event. Indeed, it was Costa who was the most active in the opening hands – losing a small pot to Michael Horchoff A♣ 7♣ > 2♠ 2♣ before recovering her chips with a post-flop shove against Randall Price.

However, it was Jared Jaffee who made the first significant contribution to the final table – busting Randall Price in sixth after Price´s 10♠ 10♦ ran into Jaffee´s pocket Aces and failed to hit the Ten he needed to stay alive in the tournament. Costa remained active throughout the first level, and won three consecutive pots to climb up to 3 million chips, but a post river bet of a million chips by Jaffee against Costa – in a pot already containing 1.15 million chips – forced her out of the hand and back down to her starting stack of 1.7 million chips by the beginning of Level 27.

Level 27 (blinds 25,000/50,000 – ante 5,000) was when Blake Purvis moved up the WPT Jacksonville Scramble leaderboard and into second place – courtesy of winning several small pots against Jared Jaffee and Corrie Wunstel. A ½ million chip pot against Jaffee – in which a paired 8♥ was good enough to win the hand – and an 800,000 chip pot against Wunstel, which Wunstel gave up after some post-river aggression, helped Purvis chip up to beyond 3 million chips by the end of the level.

Chip leader Jared Jaffee maintained his position at the top of the chip counts by eliminating Corrie Wunstel in fifth 9♥ 9♣ > A♣ J♦, but Blake Purvis moved to within two big blinds of the chip leader when busting out Margo Costa in fourth 7♥ 7♣ > K♥ 10♥, and then took a narrow chip lead when finding the Jack he needed to send Michael Horchoff to the rail in third place J♦ 8♦ > K♦ 7♣.

Jaffee Powers Back and Takes Heads-Up by Cracking Aces

Going into the heads-up, Blake Purvis had a 5.39 million -v- 5.34 million chip advantage over Jared Jaffee; but Jaffee quickly powered back into the chip lead when he rivered the 9♣ to complete two pairs (9♥ 2♥) against Purvis and then established a 2:1 chip advantage when turning a straight with 4♣ 5♣.

Blake Purvis battled back gamely – forcing Jaffee out of a 1.6 million chip pot with a post-river shove and flopping a pair of Kings with K♥ 9♠ for another ½ million chips – but going into Level 30 (blinds 50,000/100,000 – ante 15,000), Purvis still had only half as many chips as his opponent due to Jaffe´s post-flop aggression.

The deciding hand of the WPT BestBet Jacksonville Fall Poker Scramble was the ninety-ninth of the final table. Blake Purvis raised to 250,000 chips from the small blind and Jaffee made the call. Following the flop of J♦ J♥ 6♥, Jared Jaffee checked, Blake Purvis bet 400,000 chips, Jaffee raised to 1.3 million, and Purvis announced he was all-in for his last 3.4 million. Jaffee called and the cards were on their backs:

Blake Purvis A♥ A♠

The Turn card 6♣ kept Purvis ahead with his two pairs Aces and Jacks, but the Q♥ on the River completed Jared Jaffee´s flush draw and he had won the WPT BestBet Jacksonville Fall Poker Scramble for $252,749.