American Will Jaffe celebrated the fourth of July with victory in the $1,000 buy-in No-Limit Hold’em event #54 at the World Series of Poker (WSOP) in Las Vegas. 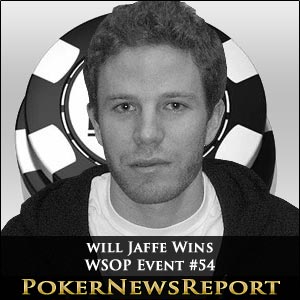 American Will Jaffe celebrated the fourth of July with victory in the $1,000 buy-in No-Limit Hold’em event #54 at the World Series of Poker (WSOP) in Las Vegas.

New York’s Jaffe outlasted 3,220 other competitors to collect the gold bracelet and $500,075 winner’s cheque at the Rio All-Suite Hotel & Casino’s Amazon Room, but only after returning for a fourth day when he had to overcome Brazilian Luis Campelo.

It was certainly a war of attrition as the 25-year-old poker pro battled away for nearly 33 hours in total to ultimately defeat Campelo, of Curitiba, after the pair had bagged up on Day 3 with 5,390,000 and 4,275,000 chips respectively.

Having played two levels heads-up on Day 3, the combatants returned once more – with Jaffe immediately chipping up to gain the early advantage and seemingly on the way to a straightforward victory.

However, that all changed during a thrilling hand. With Campelo all-in holding K♦ 2♥ and Jaffe way ahead pre-flop with his A♣ Q♣, the flop came down A♠ 2♠ 7♦ to reaffirm the latter’s lead. Campelo required a deuce or king to steal the pot, only for the Q♠ to remove some outs for the Brazilian. But all was not lost as the 2♣ came on the river to hand Campelo trips and the pot – much to the delight of his noisy rail.

Now on 5.5 million, Campelo had moved in front of Jaffe’s 4,165,000-chip stack, resulting in both returning to grinding out as pots stayed small. It seemed neither player wanted to commit – but, once again, a massive hand gave Jaffe the advantage when the American’s 9♦ 5♦ hit big on a K♣ 5♠ 3♠ 4♣ 9♥ board.

Campelo was now down to 2.2 million while Jaffe had zoomed up to 7.4 million, resulting in the South American either shoving all-in or folding pretty well every hand.

But something had to give and Campelo was snap-called by Jaffe when moving all-in from the button. The Brazilian showed K♦ 3♠ while big blind Jaffe tabled A♣ 2♠ ahead of the Q♣ 2♦ 2♣ flop that prompted an enormous cheer from the American’s supporters. The A♥ turn gave Jaffe a full house and produced an even louder roar from his rail, before the unimportant 8♣ arrived on the river as Jaffe celebrated Independence Day in style.