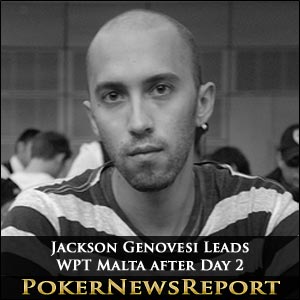 Despite the presence of top poker stars such as Phil Hellmuth, Jason Mercier, Kara Scott, Vanessa Selbst and Jonathan Duhamel, the WPT Malta Main Event only managed to attract 169 players and create a prize pool of $643,641. One player who will not be concerned about the lack of competition is Jackson Genovesi, who could double up his lifetime live poker earnings with a top 2 finish in the tournament.

Genovesi entered Day 2 as the substantial chip leader after crippling Kara Scott and eliminating Ronnie Bardah towards the end of Day 1B, but was soon joined at the top of the leaderboard by Finnish player Sampo Ryynanen – who eliminated Tim Reilly in a flush over flush hand and then came from behind to river a straight and bust Alfonso Amendola – and Jeffrey Rossiter, who paired the Ace in his A♥ K♣ hand to send Jens Schmeig (K♠ K♦) to the rail.

Ilan Boujenah also got into the act – his pocket Queens holding against an opponent´s A4 suited to chip him up – before the Israeli poker star got into an altercation with Jack Salter due to Salter´s lack of live tournament experience. Boujenah lost 260,000 chips in that JJ<KK hand (after which he was seen head-butting the wall), but got it all back with interest when his A♦ K♥ bettered Jason Mercier´s A♠ Q♣ to eliminate the Global Poker Index leader from the event.

Phil Hellmuth was to depart just before the close of play, “trapping” Bastien Lebel into shoving with 7♥ 7♣ against Hellmuth´s A♣ K♣. Hellmuth managed to avoid all his possible outs and a first WPT title still eludes him. Hellmuth was just one of a rash of eliminations before the conclusion of the day – we also lost Erik Cajelais (5♠ 5♥ < A♦ J♣), Dominik Nietsche (A♠ 2♠ < A♣ 10♠) and Jonathan Duhamel – who six-bet jammed his pocket Tens into the pocket Jacks of Jackson Genovesi to return Genovesi to the top of the leaderboard with a massive chip advantage going into the penultimate day of the WPT Malta.

When Day 3 of the WPT Malta starts at the Portomaso Casino, 26 players will be taking their seats and play will continue until only 6 remain. Only 21 players will cash because of the small entry into the event, so expect very little to happen for the first couple of hours.