Jackie Gazier continues to have a magnificent year as the last woman standing in the 2013 WSOP Main Event. 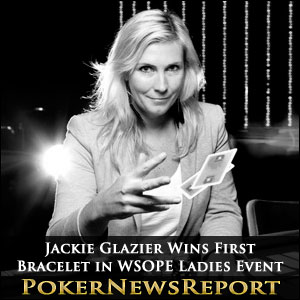 Jackie Gazier continues to have a magnificent year as the last woman standing in the 2013 WSOP Main Event.

In the past 12 months several top professional women players have proven that poker is no longer just a man’s sport. First, Gaelle Baumann and Elisabeth Hill finished 10th and 11th respectively at last year’s WSOP Main Event. Then, Loni Harwood made a deep run in several WSOP events before capturing gold and $609k in this year’s Event #60 $1,500 NLHE. Now, it’s Jackie Glazier’s turn. After finishing 31st in this year’s Main Event, the fierce Australian pro has proven that she’s no fluke, taking down her first bracelet in the 2013 WSOPE €1,1k Ladies Only event.

65 of the most dangerous women in poker, including Baumann, Liv Boeree, Harwood and Allyn Jaffrey Shulman gathered for the event, which took place over a two day period this weekend. All but eight players were eliminated on Day 1, and only seven would cash. After declining a deal that would pay the bubble girl (Glazier was the only holdout), Anais Lerouge would be knocked out on the 10th hand of play.

On a flop of Q♣J♣2♠ Lerouge would raise all in holding A♣2♣ for bottom pair and the nut flush draw. Her opponent, Marline Valente held the 10♣9♣ for two live cards and an open ended straight flush draw. The turn paired Valente and the river bricked, knocking out Lerouge in highly dramatic fashion.

Baumann would fall in seventh after losing a flip, and Sherrie Lindsey-Jones in sixth. Nathalie Odet, Celine Bastian and Bismuth would finish fifth, fourth and third, respectively. Bismuth’s third place finish was worth nearly 9,000 Euros. The stage for heads-up play was set.

Glazier held the chip lead throughout the final table, and would enter heads up play with a nearly 1.5-1 chip advantage. However, within 20 hands Valente would breakthrough and take the lead. The two battled back and forth for a while, each player playing conservatively, until hand #109.

In that hand, Glazier opened from the button to 2,500. Valente, in what some players would call a massive spew, over-jammed for nearly 90,000. Glazier immediately called with the best hand, J♣J♥. Valente held 6♦6♠. The board ran out A♥Q♥4♠5♦7♣ and Glazier was declared the winner. The humble pro was awarded nearly €22,000 for her efforts. But more importantly, after two near misses Glazier is finally a WSOP bracelet winner.

Momentum is on Glazier’s side. She recently signed a deal with rising online poker site 888poker, joining three November Niners – JC Tran, Jay Farber and Michiel Brummelhuis, and is determined to close out 2013 strong.