Just two players remain in with a chance of collecting the $742,072 top prize and gold bracelet for winning event #41 at the World Series of Poker in Las Vegas. 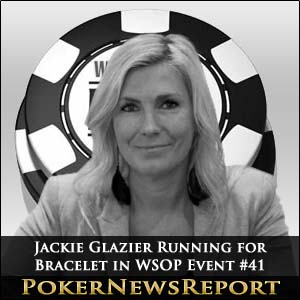 Just two players remain in with a chance of collecting the $742,072 top prize and gold bracelet for winning event #41 at the World Series of Poker in Las Vegas.

Ten more levels were played out during Day 3 of the $3,000 buy-in No-Limit Hold’em tournament at the Rio All-Suite Hotel & Casino, leaving 28 players disappointed as Australian Jackie Glazier and Greg Ostrander, of New York State, emerged from the pack to battle it out for the title.

They had the choice to play an extra level in an attempt to finish the event, but decided to return for a fourth day today, with Melbourne’s Glazier holding a very healthy chip lead of 9,480,000 to Ostrander’s 3,070,000.

Now down to a single table of 10, another two-and-a-half passed before London-based Brit JP Kelly crashed out in 10th place for $41,976 when his all-in pre-flop move with A♣ 10♠ failed against the A♦ Q♣ of American Dylan Hortin.

Dylan Hortin Out in Ninth

However, Arizona’s Hortin was next to hit the rail in ninth place for $53,126 after his dominating A♥ K♦ fell to Englishman Paul Vas Nunes’ A♠ Q♠ after the latter made a pair of queens on the river.

Pennsylvania’s Kyle Frey exited in eighth place for $68,121 when falling to another Vas Nunes suckout. Frey showed A♦ Q♠ but lost to Vas Nunes’ Q♦ 4♦ when the Brit made a flush on the turn.

Day 2 chip leader Joseph Chaplin, of New York, was next to fall in seventh place for $88,481 when involved in a three-player all-in pot while holding 10♥ 9♠. But it would be Darryl Ronconi, of Illinois, who would snatch the pot with A♦ Q♦.

Ronconi didn’t hang around too much longer, though, as he was eliminated in sixth place for $116,452. He was all-in, with A♠ Q♥, following a succession of pre-flop raises against the 5♣ 5♥ of Ostrander. The board gave Ronconi no help and he was knocked out.

Nevada’s Roger Fontes – who had become the short stack – left in fifth place for $155,498 after shoving all-in, with pocket deuces, over the top of Glazier’s raise. Glazier made the call to show Q♥ J♦, with the A♠ A♥ K♠ K♣ 5♥ board counterfeiting Fontes’ twos.

Fourth place and $210,793 went to Denmark’s Morten Mortensen after Vas Nunes notched his third suckout. The Brit tabled 7♦ 3♦ to be well behind Mortensen’s K♥ 10♦, but spiked a three on the river for the knockout.

The last player to exit was London’s Vas Nunes after he got involved in a pre-flop raising battle with Glazier. Vas Nunes decided to call an Glazier’s all-in shove, but found his A♦ 10♥ bested by his Aussie opponent’s K♠ Q♣ after she made an unbeatable club flush on the turn.