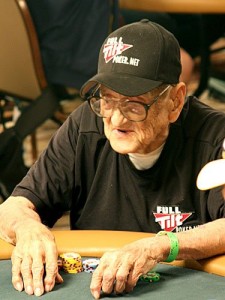 The poker community is in mourning as Jack Ury, the oldest player to ever participate at the World Series of Poker, has passed away at 97 years old. He will always be remembered for good humor, passion for poker, and a slowroll at the 2009 WSOP in one of the most memorable hands ever caught on camera.

Jack was born on the 22nd of March 1913 in Terra Huate, Indiana. During his life he was a U.S Navy veteran of World War Two and also worked as a postal worker for the USPS (United States Postal Service) before retiring in 1978. He was married to his wife Elizabeth (who passed away in 2008) for 66 years and they had four daughters together.

Jack participated in the World Series of Poker (WSOP) Main Event for four years (always making it to Day Two of the event, but a Day 3 was his best result meaning he never managed to cash), and last years appearance gives him the record of the oldest player to ever compete at the WSOP at 97 years of age.

He earned respect from the poker community and beyond as he played for up to 14 hour sessions while blind in one eye, limited vision in the other, and deaf in one ear, however through his passion of the game he enjoyed himself while competing on the felt. Often his opponents would help him post blinds and stack chips, as did his 32-year old grandson Seth Harrold who first travelled to Las Vegas with his grandfather in 2007.

It will be one spectacular hand caught on the 2009 Main Event coverage on Day 2 which will forever stay in the minds of players as they remember Jack Ury. He slowrolled opponent Stephen Friedlander when he held a better full-house. You can watch the magic moment which will forever live on in WSOP history below:

Who Are the Most Popular Poker Players On Twitch?

Poker Strategy: How To Approach The Turn