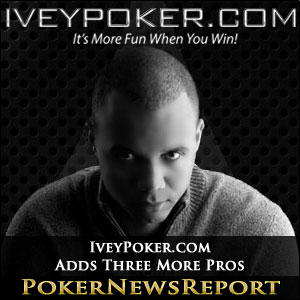 Kevin Vandersmissen, Mathew Frankland and Ronnie Bardah join the roster of pros at IveyPoker.com. Previous rumors had the site set for launching on Jan. 14. However, that date has come and gone with no new mention of a revised date that players can expect to receive top training and learn how to play the correct way, as Ivey said about his teaching goals for the new site.

Vandersmissen captured the 2012 Irish Open last April, adding $553,316 to his career totals. Another big score on his resume includes a second place finish in the 2011 PokerStars EPT Snowfest Main Event that was good for $368,601. Vandersmissen is a native of Belgium.

Frankland, from Teesside in the UK, has been playing on the live circuit since 2009. Though failing to win a title in his short time as a live pro, he did nail third place in the 2010 English Open that paid $119,409 after posting a buy-in of $5,428. The up-and-coming star achieved a second place ranking in UK and Ireland in 2012.

Bardah is originally from Brockton, Massachusetts, in the U.S. and won a World Series of Poker bracelet last summer in $2,500 Limit Six-Handed Hold’em. That $182,088 payday was the second-best of his career. In 2010, “RoNasty” finished 24th in the WSOP Main Event, taking home $317,161. Bardah is the veteran of the three newest additions to Team Ivey, playing live since 2003.