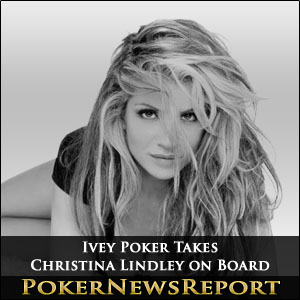 IveyPoker.com will soon be opening its virtual doors.  Ahead of its launch, the online poker site is signing up pro players that will be ready to go when the action starts.  The latest poker pro to be added to the list at Ivey Poker is Christina Lindley, the model that turned into a poker pro.

Originally, the model Christina Lindley, known for her sporty look and muscular development, comes from Atlanta, Georgia.  She has modeled in magazines such as Maxim, Playboy, and also in a number of fitness magazines.  When the 30-year-old model moved to Los Angeles in order to try for an acting career, she started to play poker.

Christina explains that she was bored when there was a writer’s strike, and having nothing to do, she went to visit her father in Tennessee.  During this visit, her father took her with him to go and play in a casino.  The father and daughter played poker, and, in Christina’s words, she “fell in love with it.”

Not only did Christina Lindley fall in love with the game of poker, she learned to play it well and when she played at a tournament in 2008, she made her first live tournament cash winnings.  Since then she has earned $126,979 in live cash winnings.  Last year, Christina made it fairly far in the World Series of Poker Main Event, ending in the 32nd place.  For coming 32nd out of 6,598 entrants, Christina won $32,871 in the $10k WSOP Main Event 2012.

While the ex-model has done well in live tournaments, her online earnings, using the screen name of ‘Lindeyloo22’ are even better.  She has won a total of $905,453 playing online poker.  Included in her online poker winnings are her winnings from the World Championship of Online Poker where she took home $127,000.  Another tournament, where Christina placed second, the FTOPS 10,000 tournament, saw her taking home a whopping $106,000.

The poker pro has said that she’s excited to be joining the Ivey Poker team.  She said:

I expect this to be a memorable year, for myself and every other amazing player on our team.