The popular Facebook app of Ivey Poker is now available for download on all smartphone and tablet devices. 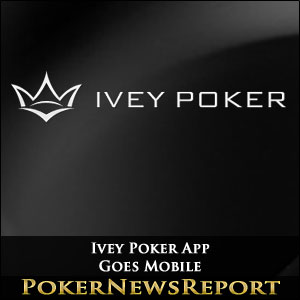 The popular Facebook app of Ivey Poker is now available for download on all smartphone and tablet devices.

On Monday, Ivey Poker posted a press release announcing that the mobile version of its poker application is now available. The beta version of the app, which was launched in July, was previously only available on Facebook.

To date, over 10,000 poker enthusiasts are actively using the app; a far cry from the millions of users on Zynga Poker, but a hefty amount nonetheless. It is assumed that having access to Ivey Poker on mobile devices will increase its appeal dramatically.

In a rare statement by the ever-elusive Phil Ivey, the poker icon and nine time WSOP bracelet winner said

Just like with poker, the app is ever-evolving. We want to offer as many platforms as possible to give everyone a chance to play.

Further down in the release, players were reminded what differentiates the Ivey Poker app from traditional casual poker applications. For one, it touted its video library that acts as a training library, and secondly, its extensive list of Team Ivey professionals which includes recognizable poker figures like Greg Merson, Patrik Antonius, and Andrew “Lucky Chewy” Lichtenberger.  In total, 30 of poker’s superstars comprise Team Ivey. Impressive, but then again, who wouldn’t want to align with the more familiar name in poker?

In reality, the Ivey Poker app functions much like most social poker applications. It features a splashy interface, plenty of blatant upsells, and the ability to see how you stack up against your friends.  Outside of the most basic training videos, which are free, players are given the option to unlock special segments with in-game gold, which can be purchased for real money.

The glossary consists of basic poker terms. Some terms are supplemented by a video. These video sequences are led by scantily clad women who clearly have never played a hand of poker in their lives.  Suffice to say, at times Ivey Poker feels more like a thinly veiled money making gimmick than a premium poker application. But for beginners looking to get their feet wet, it’s just as good as any free alternative. Still it’s a bit hard to believe that someone like Phil Ivey would endorse such a shameless product.

Near the end of the release, Ivey went onto state “I remember how difficult it was when I first started playing online poker. There were very few options available. If you did not have a PC, you could not play. That is why we are striving to make Ivey Poker available to everyone.” Whether these are Phil’s actual words or not remains unknown, but what is known is that Ivey Poker is poised to make its mark in the social poker landscape.