Phil Hellmuth and Phil Ivey are well in contention to add more gold bracelets to their respective collections from event #32 at the World Series of Poker. 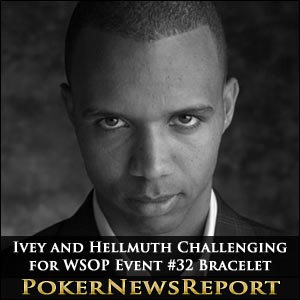 Superstars Phil Hellmuth and Phil Ivey are well in contention to add more gold bracelets to their respective collections from event #32 at the World Series of Poker.

Hellmuth is not the only 2012 winner in the final 15, though, as Monnette took down the $5,000 buy-in Seven-Card Stud event #10 for $190,826. If either of these two can secure this event’s bracelet, they will be the first doubles winners at the 43rd staging of the annual poker festival.

Additionally, Monnette and Hellmuth are sit in third and ninth places respectively in the WSOP Player of the Year competition so would certainly help their standings with a victory.

Bach – who won the $50,000 buy-in H.O.R.S.E. event #49 in 2009 for $1,276,806 –moved past the half-million chip mark just ahead of dinner, before taking down a huge pot against Daniel Negreanu in level 11, when both players completed flushes and lows. But Bach’s ace-high flush and a seventy-five low took the whole pot.

The money bubble burst during level 17 – after 11 hours of play – when Pennsylvania’s Eric Wasserson was eliminated in 25th place as the bubble boy.

Wasserson’s chip stack had dwindled down to 12,000 when Vegas-based Ivey bust him during a hand of Stud. Ivey started with split eights and found a third on fourth street, while Wasserson could only make a pair of jacks to allow Ukrainian Alex Dovzhenko to become the first casher in 24th place for $16,246.

Mike Sexton Misses Out on Cashing

However, Wasserson wasn’t the only player who failed to make the money, with the likes of Michael Chow, Mike Sexton, Shaun Deeb, Michael Binger, Alexander Kuzmin, Robert Mizrachi, Mike ‘The Mouth’ Matusow, Jennifer Harman, Allen Bari and Jason Mercier joining the bubble boy at the rail.