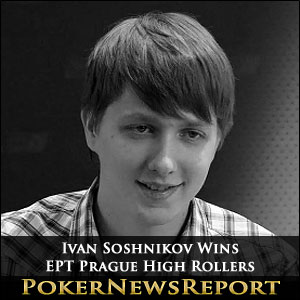 The conclusion of the PokerStars-sponsored EPT Prague High Rollers was something special. Already a record-breaking event due to players opting to compete in this tournament rather than the WPT Prague Main Event, the previous two days action had featured bad beats, cracked Aces and storming recoveries.

Possibly the most impressive recovery had been made by Olivier Busquet; who had gone on a super-hot streak on Day 2 after being reduced to just 8 Big Blinds, to start the final table of the EPT High Rollers Event second placed in chips behind overnight chip leader Dmitry Yurasov.

With blinds starting on the final day of the EPT Prague High Rollers Event at 10,000/20,000 (ante 3,000), quick moves by the short-stacked players was anticipated, and Mike McDonald got off to the best possible start by doubling up in the first hand of the final day K♠ 9♥ > A♠ 2♥ against Thomas Muhlocker.

However, whatever McDonald could do, Ivan Soshnikov could do better, and he followed a double-up against Max Heinzelmann A♣ J♥ > Q♣ J♣ by crippling Oleksii Khoroshenin 10♦ 10♣ > 5♠ 4♠ when flopping a Full House. Khoroshenin was reduced to just 13,000 chips (less than one big blind), but he twice tripled-up to get his stack up to 200,000 chips.

Sadly for Khoroshenin, his super-hot streak could not last forever, and he was the first player to be eliminated on the final day of the EPT High Rollers Event after moving all-in once again (this time with A♥ 5♣) and getting a call from Soshnikov (9♥ 9♠). The pocket Nines held to bust Khoroshenin, and Soshnikov´s superb start had seen his chip stack increase to 826,000 chips.

In yesterday´s PokerNewsReport, we commented on how Vanessa Selbst still posed a threat in the EPT Prague High Rollers, and it looked as if our prediction was going to be accurate when she eliminated Jeff Rossiter in ninth place K♣ Q♦ > A♥ Q♣ (Selbst turned a King-high straight) to move into the chip lead. However, she was crippled in a three-way pot which saw the elimination of Max Heinzelmann, and bust out of the High Rollers Event soon after.

In the three-way pot, Heinzelmann had moved all-in with A♣ Q♣ (doh!) and Selbst had moved all-in over the top with J♠ J♦. Her plan to isolate Heinzelmann failed when Dmitry Yurasov called her bet with Q♠ Q♦, and the three sets of cards were on their backs. There were no dramas as the board ran Eight-high, and Heinzelmann was sent to the rail in eighth, with Selbst crippled and Yurasov taking a huge chip lead.

Vanessa Selbst was bust soon after when she ran her short-stack into Olivier Busquet´s A♣ A♥, and Busquet was also responsible for the elimination of Andy Seth in an incredible hand in which Seth moved all-in pre-flop with A♣ 9♣ and Busquet made the call with 7♥ 7♣. The flop of 10♦ 10♣ 8♣ missed Seth´s overcards, but gave him outs to a Flush – which he made when the 6♣ appeared on the Turn. However, the 10♠ spiked on the River to give Busquet a Full House and send Andy Seth to the rail in sixth place.

Yurasov on a Roll – Busts McDonald and Muhlocker with Ace-Queen

As the game went five-handed, Dmitry Yurasov went on a roll. Mike McDonald had secured another double-up when his 6♣ 6♥ flopped a set to best Yurasov´s J♥ J♣, but McDonald could not find a third six the next time he shoved all-in and Yurasov gained his revenge by eliminating McDonald in fifth place A♣ Q♣ > 6♦ 6♣.

Yurasov then went to work on Thomas Muhlocker – rivering a Flush to reduce Muhlocker to his final million chips, which all went into the middle of the table soon after when Muhlocker was dealt K♥ Q♠. Yurasov made the call with A♠ Q♥ and, on a Queen-high board, Dmitry Yurasov´s kicker won the hand and Muhlocker was bust in fourth.

Despite his big chip advantage, Dmitry Yurasov failed to get away from the attentions of Olivier Busquet and Ivan Soshnikov. Busquet doubled-up 6♦ 3♦ > K♥ Q♥ when rivering a diamond flush, while Soshnikov flopped a full house with A♥ 6♣ to double-up as well. Consequently, when the three players took a break at the end of Level 24, the relative chip stacks looked like this:

Soshnikov Doubles and Dominates to Win

A double-up by Olivier Busquet against Ivan Soshnikov during Level 25 (A♦ Q♣ > J♣ 10♥) seemed to be the trigger that sent Soshnikov on another super-hot streak. Soshnikov doubled-up against Dmitry Yurasov J♣ J♠ > 9♣ 9♠ in a pot that Busquet had committed 250,000 chips to before folding, and then took another big pot from Yurasov 9♦ 5♦ > A♥ 3♥ to move into the chip lead.

Ivan Soshnikov continued to dominate three-handed play, and Yurasov was eventually bust in third place when his Q♦ J♠ failed to improve past Soshnikov´s A♣ 7♠. Ivan Soshnikov took a 6.65 million -v- 1.625 million chip advantage into the heads up against Olivier Busquet, and the two players decided to take a dinner break before starting the heads-up – but they need not have bothered the catering staff, because the tournament was over soon after they returned.

In just the second hand of the heads-up climax to the EPT Prague High Rollers, Ivan Soshnikov moved all-in with 10♥ 10♦ and Olivier Busquet made the call with 4♥ 4♠. The two players watched the board of K♣ 3♣ 7♥ / 6♥ / J♥ produce no surprises and Ivan Soshnikov had completed a sensational ninth-to-first comeback to win the tournament.